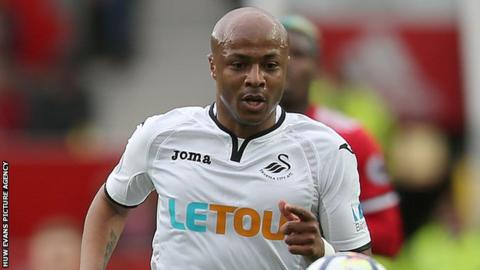 The Turkish side have an option to sign the 28-year-old Ghana international on a permanent deal after the loan.

"I understand the circumstances of the move - it's part of the restructure of us going forward," Swansea manager Graham Potter said.

"From my perspective he has been brilliant."

"He has applied himself in training, supported what we are trying to do and been very professional."

"He has been a joy to work with and we wish him the best."

Ayew is thought to be among Swansea's highest earners and his departure was expected following the club's relegation from the Premier League.

The former Marseilles striker re-signed for the Swans from West Ham United in January in a move worth £18m.

But Ayew failed to score in 12 appearances after joining for his second spell at the club, having left for West Ham in August 2016 following one season in south Wales.

He played no part in the Swans' 2-1 friendly defeat by Spanish club Eibar on 24 July.