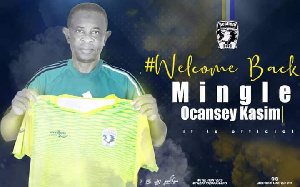 Head coach of Bechem United Kasim Ocansey Mingle has reacted to his side drubbing against Asante Kotoko in the outstanding matchday 16 fixture of the Ghana Premier League at the Obuasi Len Clay Stadium.

The Porcupine Warriors defeated the Hunters 4-0 on Wednesday. Goals from Abdul Ganiyu, Fabio Gama, Andy Kumi Francis and new boy Michael Vinicius were enough for the Kumasi based club to pick all three points at stake.

At the post-match conference, the coach refused to credit the Porcupine Warriors but rather slammed his players over failure to play to instructions which resulted to their defeat.

“Our boys did not play well today, they did not do well. They all flopped that is why Kotoko were able to beat us 4-0”

“Today what Kotoko play if we had played what we play against Liberty even half of it we could have beaten them. I didn’t see any wonderful performance from the Kotoko team, they did not play anything extraordinary but because our boys flopped that is why they were able to beat us” he said.

Bechem United are 7th on the table with 27 points after 18 matches.