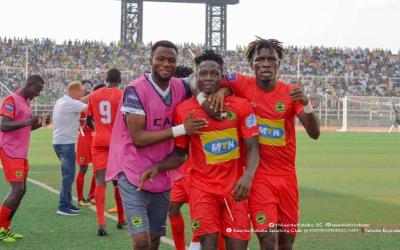 Public Relations Officer of Asante Kotoko, Kennedy Boakye Ansah is highly optimistic his side will secure qualification in Kumasi against Etoile du Sahel on Sunday, September before the second leg in Tunisia.

The Porcupine Warriors will welcome the North African club to the Baba Yara Stadium for the first leg of the final phase of the qualifying stage of 2019/20 CAF Champions League.

Speaking to Sports Express on Royal TV, the spokesperson revealed the Reds have quality players to defeat Etoile du Sahel to seal qualification ahead of the second leg in two weeks time.

"We have the quality to beat Etoile du Sahel and with the kind of preparations the players are going through,  I am confident the game will be killed here on Sunday at the Baba Yara Sports Stadium

"The players are very much aware of the task ahead of them and with right mentality and approach there's no way Etoil will survive at the Baba Yara Sports Stadium " he added.

Asante Kotoko advanced to this stage of the competition after a 4-3 aggregate scoreline against Kano Pillars.