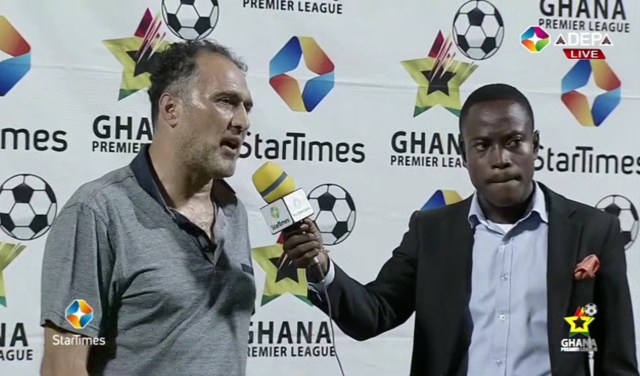 Head Coach of AshantiGold Sporting club Kassim Gokydiz has warned Ghana Football Association to retract the statement issued over the authenticity of his UEFA A coaching licence or report them to FIFA.

Ghana FA yesterday revoked Gokydiz's provisional lisence to coach AshGold and also deleted his name from the competition management system. Per their checks from The Turkish FA and German football Association, the GFA is unable to validate the authenticity of Gokydiz's UEFA license A certificate.

But according to the Miners head coach his license is valid until 31st December 2021, and he has also hold the UEFA license A for 15 years now but the GFA wants to destroy his hard won reputation.

"GFA received letter via email yesterday from Turkish FA through [email protected] that my license is valid until 31st December 2021 and now am waiting for the GFA to revise their notes that they allow me coach my team because I have genuine and valid documents." Gokydiz told Kumasi based Oyereepa Fm.

"GFA is now destroying my reputation and when they don't do the right thing ,I will report them to FIFA for sure." he added

"Since 15years, am a holder of UEFA license A and now GFA is saying my documents are not valid, that's a complete lie, I won't accept that ,no one can destroy my reputation, that's my concern now."

"They should withdraw their statement about me or face me at FIFA. Now a lot of people think am not qualified which is false.

If even AshantiGold will not allow me to continue, that's fine but my reputation is important to me. I won't allow the FA tarnish my image."

"They should do the right thing otherwise FIFA will settle."

Gokydiz may not be travelling with the Miners  from Obuasi to the Ashanti Regional Capital Kumasi to face the Porcupine Warriors in a regional derby at Baba Yara Stadium in GPL Matchday 10.