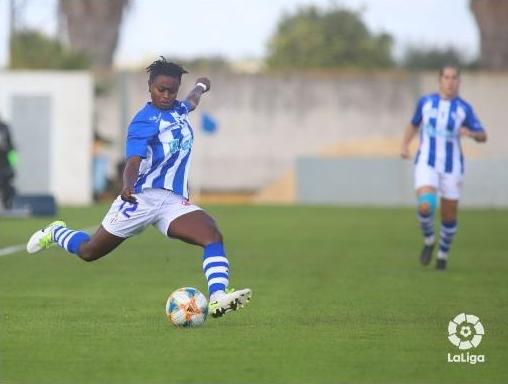 Black Queens striker, Priscilla Adubea has emphatically said she is not a lesbian but has no problem with it saying, it is a choice.

Lesbianism is believed to be among female players in the country.

But Adubea who plays for Spanish side, Sporting de Huelva forward disclosed that she has a boyfriend and will be very happy to be married after her football career.

According to her, its a choice does not see anything wrong with it.

“Ghanaians don’t respect female footballers because they think we are into lesbianism, I won’t speak for lesbians but it’s a choice. People who are not footballers are also into it”, she noted.

When quizzed whether she will accept a proposal from a lesbian or a bisexual, she answered without mincing words.

“I’m not here because of the act, my vision is to become better as a footballer and nothing can distract my ambitions.

"Those here who into the act earned all the money through football so there’s no point in accepting a proposal from them because if money” she added.

The issue of Lesbians, Gay, Bisexuals, Transgender, Queer and Intersex (LGBTQI) has become rife and dominated radio and TV discussions ever since an office was established and duly opened in the country.