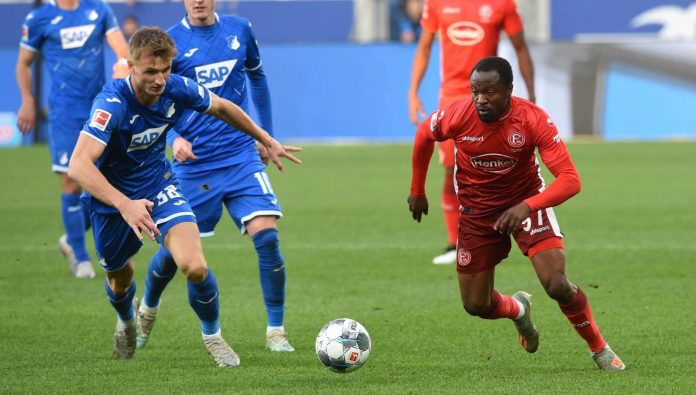 Ghanaian international Bernard Tekpetey has bemoaned his Fortuna Düsseldorf’s one-all draw against Hoffenheim in the German Bundesliga over the weekend.

The Black Meteors winger was in action for his side when they traveled to the PreZero Arena on match week 14 of the ongoing 2019/2020 league season.

He was handed a starting role and despite contributing to his side’s good start to the match, they found themselves trailing after just six minutes of play. Croatian international Andrej Kramaric shot Hoffenheim into the lead as they held on to finish the half.

A resilient performance from Bernard Tekpetey and his Fortuna teammates saw them drawing level with just a minute to end proceedings courtesy a strike from Rouwen Hennings.

At the end of the match, the Ghanaian who lasted 60 minutes of the match has shared that the team must keep fighting.

A post on his official Twitter handle shared, “Not the best result we expected but we will keep fighting till the end.”

Tekpetey who has not had the season he would have wanted is hoping to get more playing time in subsequent matches to ensure he gets back to top form to help his side.