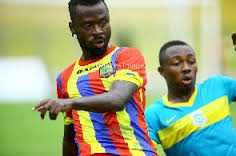 Hearts midfielder Malik Akowuah will not be available for selection in their next four fixtures of the Ghana Premier League.

According to Akowuah who sustained an injury in their 4-2 victory over Bechem United, he will be out of the rest of the first round  matches.

"When I picked up the injury in the game against Bechem United, I thought it wasn't serious initially but I realized it's serious later. I was struggling to step on it when walking," he told Fox FM.

"I'm in Plaster of Paris (POP) now and it take two weeks before it will be removed.

"I will start training afterwards so I'm sure I am out of the rest of the first round."

Malik Akowuah will need three or more weeks to recover from the ankle injury.