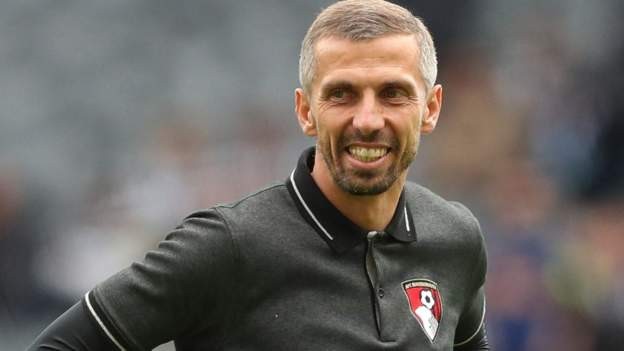 Bournemouth have appointed Gary O'Neil as their manager on a permanent basis following his spell as interim boss.

The 39-year-old took the helm at Vitality Stadium after head coach Scott Parker was sacked in August.

O'Neil has signed a one-and-a-half year contract, which has the option to be extended for a further 12 months.

Bournemouth have earned 13 points from 11 top-flight games with O'Neil in interim charge, and are 14th in the Premier League.

He has also guided the Cherries to the fourth round in the Carabao Cup courtesy of a 4-1 win against Everton. That was followed by a 3-0 league win over the Toffees in their final game before the World Cup break.

"We have been impressed with the way he has conducted himself from the moment he joined the club and feel he has earned this opportunity to continue to take the team and the club forward," Bournemouth chief executive Neill Blake said.

"Gary has worked tirelessly and diligently on the training pitch and the players have responded by producing some excellent performances and results.

"It was evident from the reception he received from our supporters following the Premier League win against Everton that they have also appreciated his efforts and we are all looking forward to continuing our working relationship with him."

Visit our Bournemouth page for all the latest Cherries news, analysis and fan viewsGet Bournemouth news notifications in the BBC Sport app - find out more

The decision has been made amid the prospect of the Cherries being taken over by a Las Vegas-based consortium.

Former Leeds boss Marcelo Bielsa held talks about becoming the new manager, but O'Neil will now have the chance to build on his interim spell.

As a player, he made more than 450 appearances for clubs including Portsmouth, Middlesbrough, West Ham, QPR and Norwich.

He took up his first coaching role in August 2020, when he became assistant manager with Liverpool's Under-23s.

O'Neil joined the coaching set-up at Bournemouth under former manager Jonathan Woodgate in February 2021, and took over the first team after Parker's departure following a 9-0 defeat by Liverpool.

The Cherries' first game after the World Cup will be their Carabao Cup tie away to Newcastle on 21 December, followed by a visit to Chelsea in the league on 27 December.