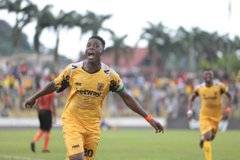 Captain for Obuasi Ashanti Gold, Shafiu Mumuni has urged the team to stay focused and hopeful whiles citing that they can qualify to the next stage of the CAF Confederations Cup following their 3-2 win against RS Bekane.

The Ghana Premier League giants hosted the Moroccan side at the Obuasi Len Clay Sports Stadium on Saturday and produced a 5 goal thriller full of action and drama.

Though Ashgold found the back of the net 3 times, the away side also scored twice, giving them a huge advantage ahead of the second leg as far as the away goal rule is concerned.

Speaking in an interview with Oyerepa FM, Shafiu Mumuni says he is optimistic the Miners can still secure qualification at the end of the two-legged tie despite conceding two at home.

“I am confident we can qualify, we will go back to training and rectify our mistakes,” the prolific striker said.

Speaking on why his side conceded two goals, Mumuni explained, “One thing that caused us is when we lost concentration. That is the reason we conceded the 2 goals.

“Let’s not lose hope, we can qualify”.

The second leg of the match will be played at Stade Municipal de Berkaneon September 26, 2019.