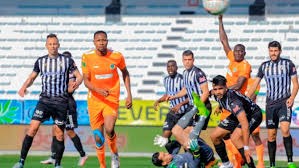 Algeria’s ES Setif, winner of the 2014 edition of the Total CAF Champions League, defeated their Ghanaian hosts Asante Kotoko 2-1 in Accra against on Sunday in the first leg of the additional second preliminary round of the 2020-21 Total CAF Confederation Cup.

Despite dominating the game, Setif conceded the opener after 68 minutes through Kotoko striker Oboko.

Shortly before full time it was another youngster Kendouci who scored the winner to give Setif an advantage before the return leg at home next weekend.

Kotoko missed a penalty in the last minutes of the game when Algerian goalkeeper Sofiane Khedairia saved his team’s win.

Gabon’s representative Bouenguidi Sports defeated Burkina Faso’s Salitas 1-0, with the lone goal coming from Junior Aubyang Bayano. The Gabonese to dream of a place in the group stage for the first time before the return leg in Ouagadougou.

In the Nigerian derby, Enyimba defeated their compatriots Rivers United 1-0. Midfielder Cyril Olisema gave his team the advantage before the return leg which promises to be an exciting one to nominate Nigeria's representative in the group stage.