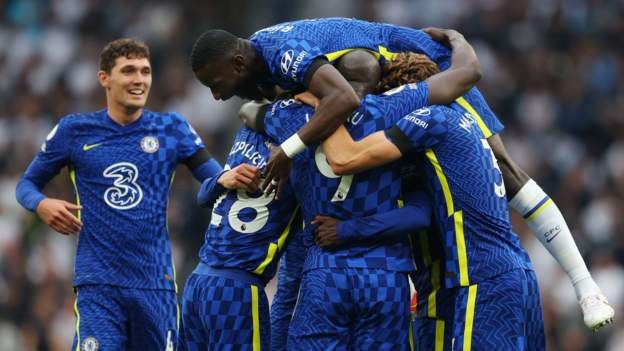 After managing no shots on target in the first half, the visitors looked like a different team after the break and scored three second-half goals at the Tottenham Hotspur Stadium.

The Blues opened the scoring four minutes after the re-start, when Thiago Silva headed past Hugo Lloris from Marcos Alonso's corner.

Half-time substitute N'Golo Kante added a second with his first goal in 49 league appearances, though his long-range effort took a massive deflection from Eric Dier.

Antonio Rudiger found the bottom corner in injury time to complete the win.

Spurs started the game brightly and were the better side in the first half, but Nuno Espirito Santo's side managed just two shots on target throughout and struggled to find a response after going behind.

Silva, Alonso, Rudiger, Romelu Lukaku and Timo Werner all came close as the Blues enjoyed 10 second-half shots on target, but Lloris made a number of saves to deny them.

Chelsea are one of only three teams yet to lose in the Premier League this season, along with Liverpool and Manchester United.

The victory lifts the Blues to joint top of the table, alongside Jurgen Klopp's side.

Before the game, tributes were paid to Jimmy Greaves who played for both clubs, after he died aged 81.

A tale of two halves

Thomas Tuchel said in his post-match interview that he was "absolutely not happy" with his side's first-half performance, and whatever he said at half-time clearly did the trick.

Tottenham 0-3 Chelsea: A lot of things went wrong in the second half - Nuno

Chelsea's best chance in the first 45 minutes fell to Mason Mount, who ran the length of the pitch after winning the ball in his own half, but the England midfielder scuffed his shot from six yards out after playing a one-two with Lukaku.

It was Mount's withdrawal at half-time that changed Chelsea's system and the introduction of Kante was the catalyst for Chelsea's dominant second-half display.

Chelsea were undoubtedly the better team after the break and two minutes after the restart, a superb ball from Silva found Alonso, but the Spaniard's goal-bound volley was tipped over by Hugo Lloris.

Alonso repaid the favour not long after, with his brilliant delivery from the corner finding the Brazilian, who rose above Dele Alli to head in the opener.

Twelve minutes into the second half, Tuchel's side had a firm grip on the game after Kante's long-range effort took a big deflection off Eric Dier and went in off the post.

No team has managed more shots on target in a Premier League match this season than Chelsea did against Tottenham, with all 10 coming in the second half.

Lloris was probably Spurs' best player as he kept a respectable scoreline, but he was eventually beaten for a third time when substitute Werner picked out Rudiger in the box, allowing the German to drill the ball into the bottom left corner.

There are pleasing signs for Tuchel that his side managed such a comfortable win without any goals from his forwards.

The German said his side still aren't at their best - a stark warning to the teams expected to be challenging for the title come May.

Spurs continue to struggle in front of goal

After winning their opening three Premier League games, it is now back-to-back 3-0 defeats for Spurs, who have scored just one goal from open play this season.

Following a difficult Europa Conference League draw against Rennes on Thursday, Spurs started the game full of energy and showed their attacking intent from the first whistle.

Nuno's side were buoyed by the return of Son Heung-min, who returned to the squad after missing two games with a calf strain.

The South Korean was at the heart of Spurs' early chances and it was he who managed the only shot on target in the first half.

After being played in by Giovani Lo Celso, Son beat Alonso, but his shot was blocked as he collided with Chelsea goalkeeper Kepa Arrizabalaga who was off his line.

But Chelsea were resolute and difficult to break down. After the break it was one-way traffic as Chelsea grew into the game and a flat Spurs side looked lethargic after going behind.

Harry Kane was kept quiet and restricted to just two chances and often looked lost at the top of the pitch. It is the first time since 2015-16 that the England striker has failed to score in his first four Premier League appearances of a season.

Attempt blocked. Romelu Lukaku (Chelsea) right footed shot from the right side of the box is blocked. Assisted by Marcos Alonso.

Attempt saved. Mateo Kovacic (Chelsea) right footed shot from the left side of the six yard box is saved in the bottom left corner. Assisted by Romelu Lukaku with a through ball.

Marcos Alonso (Chelsea) wins a free kick in the defensive half.

Attempt blocked. Romelu Lukaku (Chelsea) left footed shot from the centre of the box is blocked. Assisted by Jorginho.

Pierre-Emile Højbjerg (Tottenham Hotspur) wins a free kick in the attacking half.

Attempt blocked. Marcos Alonso (Chelsea) left footed shot from the centre of the box is blocked.

Attempt blocked. Marcos Alonso (Chelsea) left footed shot from the left side of the box is blocked.

Timo Werner (Chelsea) is shown the yellow card for a bad foul.

Bryan Gil (Tottenham Hotspur) wins a free kick in the defensive half.