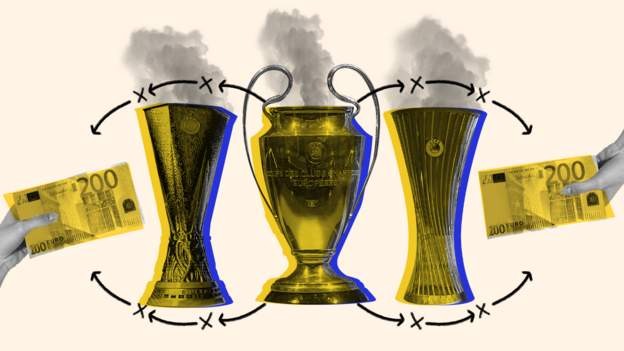 A continent-wide Euros, an expanded Champions League and an entirely new tournament designed to spread the game further than before.

At a time when the world is coming together at COP26 to tackle climate change, with potentially far-reaching impacts for individuals and businesses, does football care about doing its bit?

As world leaders gather in an attempt to limit global warming and avoid a climate catastrophe, European club football's expansion - and with it its climate impact - continues apace.

Research by BBC Sport has found that:

The introduction of the Europa Conference League this season has increased the number of group matches in Uefa club competitions to 288 in 2021-22, a 20% year-on-year rise. That's despite the Europa League group stage being reduced from 48 to 32 teams.The expansion of the Champions League (effective from 2024-25) will mean 180 group games, up from 96. That's an 87.5% increase in that competition.In the period between 2020-21 and 2024-25, there will be a 55% increase in the total number of group matches in major European club competitions.

Green, growth or greed? The impact of Uefa's new tournament

In 2018 European football's governing body Uefa announced the introduction of the Europa Conference League (ECL) because, it said, it wanted to ensure "more matches for more clubs and more associations".external-link

It did not add anything about the resultant increase in revenue.

But what about the climate cost of this new competition, which takes the game to more countries than before?

This can be measured to a large degree in terms of travel.

Of 96 group matches, only six are between teams located less than 500km apart. That, inevitably, means flights are the chosen option for teams (and fans) in almost all cases.

Flying is a significant contributor to climate change, with the aviation industry accounting for around 5% of global warming, and Western countries disproportionately responsible because estimates suggest only 3% of the world's population take regular flights.

So how does the new tournament contribute to this impact? Our findings show that:

In the Europa Conference League, 85% of group games are between teams at least 1,000km apart.The average distance travelled per team in the group stage is 5,578km. That is almost identical to flying from London to New York. Across the entire group stage, that would give each person travelling an average footprint of 1,087kg of CO2 (more than one tonne). Nineteen teams (59%) have to travel more than 5,000km in total for their group gamesForty-two games (44%) involve trips of 2,000km or more.Eleven teams (34%) have to travel more than 1,500km for each of their away gamesKazakh side Kairat have the longest travelling distance of any team - 11,348km in total. That's more than a quarter of the way around the world. A Kairat fan travelling to each of their team's away games would have a footprint of an estimated 2,212kg of CO2. That is more than half the world average per person for all activities for an entire year (4,000kg).

'We have to balance environmental, economic and social factors' - what Uefa says

Uefa faced criticism during the summer for the environmental impact of its pan-continent Euro 2020 tournament, an event staged in 11 countries.

The organisation's president Aleksander Ceferin spoke of "taking the matches to more diverse communities across Europe" and Uefa defended its environmental impact, pointing to a lack of building work for new infrastructure and a goal to minimise and recycle waste, as well as a "gold-standard" programme for offsetting emissions.

Offsetting, though, is described as "massively problematic" and "lacking in scientific credibility" by Andrew Simms, Rapid Transition Alliance co-ordinator and co-director of New Weather Institute.

Uefa's website talks of climate change as "a threat that endangers the entire planet" and states that the organisation "places a special emphasis on promoting climate action within the scope of its competitions".

It is a signatory to the United Nations Sports for Climate Action Framework,external-link an initiative that calls on sporting organisations to "display climate leadership".

But as well as concerns over the Euros and expansion of club competitions, five of the past nine Champions League finals have been contested by teams from the same country in a foreign venue. Climate campaigners called on Uefa to put the environment at the heart of such hosting decisions to limit travel, a recommendation Uefa rejected.

So is Uefa living up to its commitments?

"We are working to analyse the impact but our priority will be to reduce the footprint of each event and to offset remaining emissions.

"It's impossible to cancel all our carbon emissions because the teams need to play and they cannot go by bicycle - they have to go by plane if the distance is far. We can minimise and we can check what's the best way. Germany 2024 [the next men's Euros] is fantastic for us because we are planning 17 activities linked to the environment. We cannot go directly to zero [emissions]."

"We are setting targets and we are building our own Uefa sustainable event management system," he added.

"There will be 18 parameters applied to each competition and we will monitor how each event will be sustainable. We will test this new system in England for Women's Euro 2022 and then we will apply the full project in Germany 2024. The next step will be to apply this system to all matches in Uefa competitions and then all at a domestic level.

"We have three years [up to Euro 2024] to work with clubs to understand how we can reduce. But we cannot say we want football without fans travelling to enjoy the match, being tourists and having an economic impact. This is part of what we love.

Asked whether Uefa's rhetoric, in conjunction with the expansion of tournaments, is a case of "greenwashing", Uva added: "We have billions of fans around the world and lots of attention from the media so we know we have the opportunity to be a driver on climate action and lead by example.

"We want to play our part. It's not easy but we are absolutely engaged in this process."

As a signatory to the UN Sports for Climate Action Framework, Uefa will now be expected to put actions before words.

"We are moving beyond pledges to really coming up with actions needed in the short and medium term," Lindita Xhaferi Salihu, the Sports for Climate Action lead at UN Climate Change, told BBC Sport.

"It will be important for our signatories to demonstrate how they are going to achieve these actions given their own operations. We have made it clear that to maintain signatory status these organisations will have to report publicly on how they are dealing with their commitments."

Uefa's actions 'in direct conflict with any form of sustainability'

Hal Robson-Kanu starred as Wales' striker at Euro 2016 and, alongside his playing career, is a natural nutrition entrepreneur with a keen interest in environmental issues.

He says he feels "disappointment, frustration and sadness" at the actions of Uefa, the organisation at whose tournament he enjoyed the best moment of his career.

"Uefa is probably more commercialised now than it has ever been and is now fundamentally being run as a business," he told BBC Sport. "Decisions like the ones they are making are proving that. Being part of the UN sporting framework and making decisions that negatively impact their footprint as an organisation aren't congruent.

"It [climate] is clearly not in their priorities. It is an interesting position to take and probably not one that is aligned with a fans-first, planet-first, climate-first approach. It is in direct conflict with any form of sustainability."

Uefa and sustainability - a timelineDateWhat did Uefa do?2 December 2018Announces introduction of Europa Conference League, increasing number of European club group games by 20%11 December 2018Founding member of the UN Sports for Climate Action Framework, signing up to "reduce its climate impact"19 April 2021Announces plan to expand Champions League, with an 87.5% increase in group games.29 May 2021Ignores calls to relocate Champions League final to UK (game moved from Turkey to Portugal because of Covid),Champions League final moved to Porto despite two British teams contesting the final11 June 2021Hosts delayed Euro 2020 across 11 different countriesDecember 2021Plans to announce its environmental sustainability strategy'For us it's like the Champions League' - what do fans think?

The 32 clubs involved in this season's Europa Conference League have an average Uefa ranking of 134. Nine of the teams are not among Uefa's top 200 clubs.

For Uefa, that is the whole point.

NS Mura are ranked 339th in Europe, have a stadium with a capacity of less than 4,000 and had never before reached the group stage of a European competition.

Winning last season's Slovenian top flight put them in the Champions League qualifiers, but having lost in that competition and then subsequently been beaten in a Europa League play-off, they are now in the Europa Conference League and enjoyed one of the greatest moments in their history when they travelled to Tottenham in September.

Ian Samuel, a Mura fan who moved to Slovenia from England, said: "Financially it's massive for our club. Most clubs in Europe have suffered during Covid and this journey has brought in a lot of money and is putting us on the international stage.

"To play against Tottenham is the thing of dreams. I never thought my Slovenian team, from a town of 10,000 people, would be in London playing Tottenham.

Dejan, a lifelong Mura fan attending the game at Tottenham Hotspur Stadium, added: "We grew up with one of the players in the Mura team. Twenty years ago he was playing with us in a small field in a village of a few hundred people, now he is playing against Tottenham. This is so special and for me it's a dream come true. The small clubs like Mura can only win and can show the world we are here. It's very good for the small clubs."

If you are viewing this page on the BBC News app please click here to vote.

How we calculated the data

Travel distances are calculated from the nearest airport to the two clubs involved in each game, based on data from Air Miles Calculator.external-link

Distances and any references to emissions are based on direct flights. Some journeys may require multiple flights, which would actually increase emissions.

We have based our data on every journey being made by plane. It is possible some may be made by road or rail, but there are only three instances where clubs are less than 300km apart.