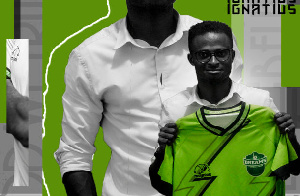 However, Abdul Karim Zito, who has been in charge of the club for the last few months will revert to his technical director role at the club.

Speaking to the club’s media, Osei Fosu admitted the work will be difficult but said with the presence of Karim Zito, there will not be any problem.

"It is the project and brand that entires me here and I feel that it is bigger and they will make me big."

"What excites me the most is the young players in this squad because everybody I'm a developer and for me, when you see young players at this level, you get excited and want to develop them more and make a career out of them."

"Generally, the work will be difficult but with Zito still around and will give every idea and what I have to know about this team so that won't be a problem."

"Dreams FC is a family already and I'm not coming in to implement something new, is about continuation so the consistency will be there. No too much changes and they will be very very good to coach."

"One thing I want to change is the mentality, for me is about winning mentality. In as much as I will want to develop players, I want them to win because you can't develop without aspiring to the greater heights so it is about winning."

His first game will be against King Faisal this weekend at the Theatre of Dreams Park in match-week 26 of the Ghana Premier League.