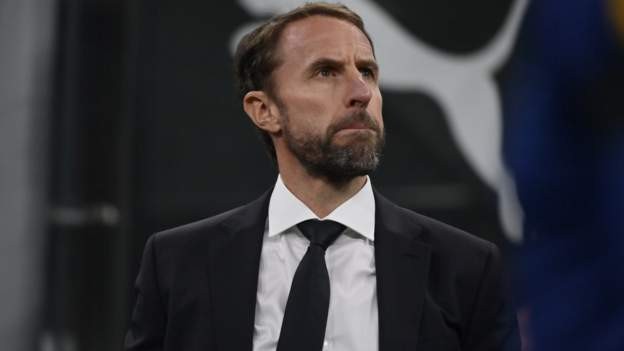 It is now 495 minutes since England scored from open play

England's embarrassing relegation from their Nations League group might just be the least of manager Gareth Southgate's worries as they once again flouted their status as one of the supposed World Cup favourites.

Here, in the majestic surroundings of Milan's San Siro stadium, England's dismal sequence of results was extended by a defeat against a seriously weakened Italy, who will not even be in Qatar when the showpiece gets under way in November.

Southgate now has 90 minutes of action against Germany on Monday before he names his squad, the dynamics of selection altered by the tournament's unique timing which sees domestic action continue until days before the opening game.

Southgate's thoughts should be crystallised, names set in stone, only the final tweaks and confirmation remaining before England embark on the mission to improve on their run to the World Cup semi-final in Russia in 2018.

Not a bit of it. Not if this performance is any accurate measure.

If this is how England are going to shape up, they will hardly set off with confidence because this was another mediocre disappointment to add to the mediocre disappointments of those four winless games in June, encapsulated by two losses to Hungary, including the 4-0 defeat at Molineux that saw fans turn on Southgate for the first time.

Southgate suffered more jeers here at the final whistle, although nowhere near the level of Molineux, from England's fans perched on the highest tier of this historic arena, which is to be knocked down and rebuilt. It is looking a little frayed at the edges but it remains wonderfully atmospheric, especially when largely populated by Italian fans celebrating yet another victory over England.

He accepted the England supporters' disapproval when he went to acknowledge them after such a performance and loss, but to hear this response to a manager who was afforded national hero status after the defeat by Italy in the Euros final was a measure of how the mood has changed.

For balance, it should be mentioned that Hungary's superb run continued with a 1-0 win over Germany in Leipzig on Friday. It is not only England who have been made to suffer by the Magyars.

It was 439 days since England lost on penalties to Italy in the Euro 2020 final at Wembley, and the body of evidence is growing that they have gone into reverse since then.

Southgate regarded this performance as a step in the right direction, an argument having merit only on the basis it was nowhere near as shambolic as the debacle against Hungary, but the rationale that this time was not quite as bad as last time does not carry much currency.

England's form has fallen off a cliff at the worst possible time and this run of form is deeply worrying with the days to the World Cup being ticked off.

Among Southgate's most serious concerns will be the lack of goals in England's side. According to sports data provider Opta, it is now 495 minutes since they scored from open play, when Raheem Sterling scored in the 3-0 win against the Ivory Coast in March.

England were heavily reliant on captain Harry Kane before their potency evaporated and he is now carrying an even greater responsibility in Qatar.

Sterling was poor here, and while Phil Foden probed and Jack Grealish at least increased the tempo when he came on as substitute, it was still Kane who seriously tested Italy keeper Gianluigi Donnarumma with a quick one-two of efforts late on, Italy's only other alarm coming when Jude Bellingham headed over in the closing seconds.

England offered up mitigating circumstances of fatigue during that June collapse, but this was a below-standard display even with players just starting their domestic season and setting sights on the World Cup.

There was little spark about England, little intent to put their foot down against an Italy team undergoing what captain Leonardo Bonucci called "a rebirth".

England lacked any rhythm, despite the pairing of Declan Rice and Bellingham in midfield. Bukayo Saka's dubious reward for being named his country's player of the year before the game was to be deployed in the unfamiliar role of left wing-back. It is not a task that suits him, and there should have been sympathy all round for Arsenal's gifted youngster when he was substituted.

Southgate and England need to rediscover what they have lost and fast, with the opening World Cup game against Iran - the same Iran who beat Uruguay 1-0 in a friendly on Friday - coming up on 21 November.

England cannot afford any slip-ups in a group that also contains the United States and a Wales team who will be straining at the leash to get at Southgate's side in their current condition.

Their Nations League fate may be sealed when they face Germany at Wembley on Monday, but this is now a fixture of arguably even greater significance as Southgate and England need something to offer optimism and hope as an alternative to the flat, tepid fare on offer in Milan.

England lack form, direction and too many places are under discussion when all plans should be formalised with just one game to play.

Brentford's Ivan Toney, surprisingly excluded from England's matchday squad here, must surely get a chance of some description against Germany. If he does not it makes a mockery of his selection in the squad.

Southgate insisted it was difficult for him to be too critical of the performance. No problem. Others can do it for him.

He is not a manager to hang players out to dry publicly, quite rightly, but England's performance was so poor, so concerning when placed in the World Cup context, that criticism is inevitable and deserved after this latest loss.