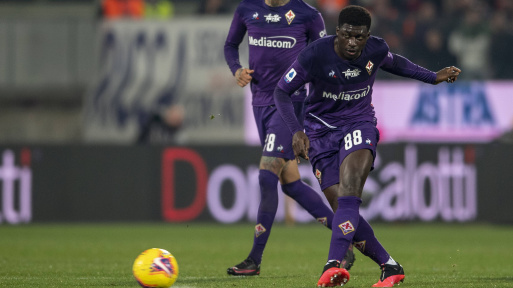 According to a report by "Il Secolo XIX" Serie A club, Spezia coached by Vincenzo Italiano have joined the race to get to Alfred Duncan.

The Ghanaian midfielder from the Inter youth setup class of 1993 is leaving Fiorentina after returning from loan from Cagliari.

Another club Hellas Verona is also interested in signing the midfielder. According to reports in the Italian media Hellas Verona are set to appoint former Sassuolo coach Eusebio Di Francesco as their new manager and he is interested in working with Duncan.

Duncan and Di Francesco worked together at Sassuolo were they formed a good relationship on and off the pitch.

The 27-year-old made 23 appearances for Cagliari playing alongside Radja Nainggolan and Alessandro Deiola as they escaped relegation in the 2020/2021 season. The former Sampdoria player made one assist and created three huge chances for Cagliari.