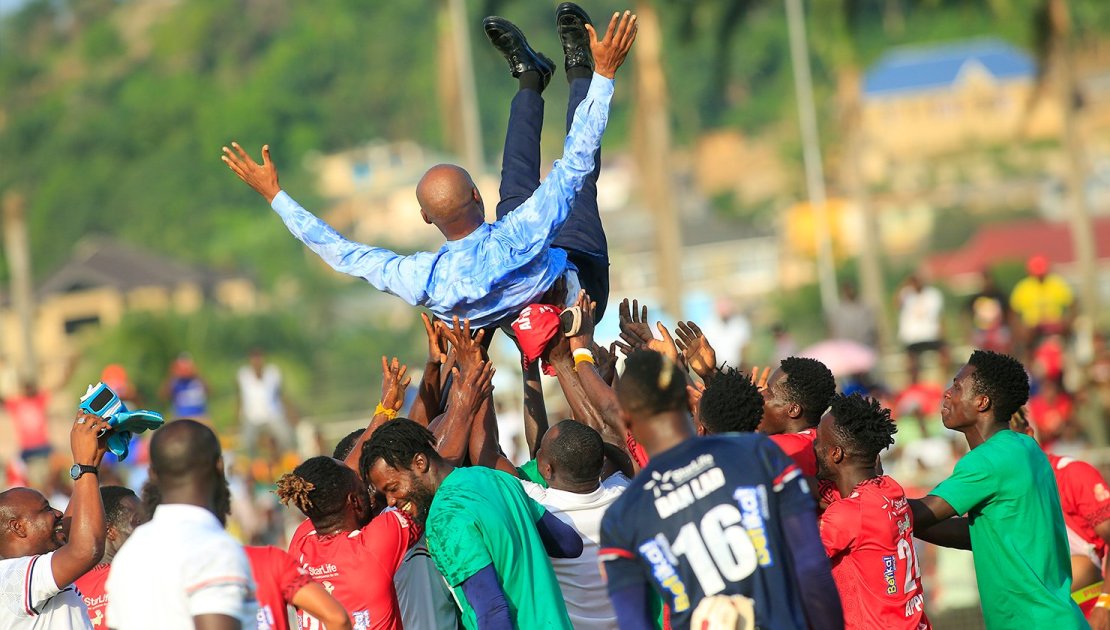 “[On] 18th Sept., 2021, we set off from Cape Coast to Kumasi to pursue a new dream. We studied the context and strategically planned. We knew there will be challenges but with tenacity and good managerial skills we will conquer. You said Kotoko will win the league and it has happened” – Journalist, Asante Forkuo; Ogum’s trusted friend.

He’s just completed walking the path other Kotoko coaches treaded, that’s, winning the Ghana Premier League (GPL) in their first season with matches to spare. Coaches Bashir Hayford, Maxwell Konadu and Didi Dramani achieved that feat. Both Bashir Hayford and Konadu won the GPL with six and four matches to the end of the season.

For Dr. Prosper Narteh Ogum, it’s three matches. That’s decent. It was predictable from the start, I mean, when Coach Ogum was signed from WAFA, that, he would be a GPL champion this season. My Kotoko affinity is known but my belief that Coach Ogum and Kotoko would be winners this season wasn’t based on a mere Kotoko affiliation.

It was premised on evidence of certain developments, practices and trends at Kotoko and backed by the club’s clout, I didn’t see how Ogum wouldn’t be a winner. As it was in the cases of Bashir Hayford, Konadu and Didi; Ogum has had fine managerial support. He’s also had considerable player quality and massive support from the fans.

Key in all these factors, from my analysis, is the time Coach Ogum dedicates to his work. Thus, aside coaches’ own outputs, I’ve always argued that, when proper managerial practices reign at Kotoko, as seen under the current administration, with improved player performance to back it, winning the GPL becomes much easier.

Ogum was savvy in his handling of the often impatient fans and the inquisitive media. There were nice comebacks like the 3-1 win over Dreams FC in Accra, historic victories like the 2-0 wins away over Aduana Stars (the first in 13 years) and Medeama (also first in eight years). There were painful losses as well. That’s natural and all part of the game.

In the media, Ogum had purposeful messages – explaining player and team performance and camp developments in clear language – wowing supporters and journalists alike. It isn’t that, Ogum suddenly had his excellent coaching attributes at Kotoko. These are traits he already possesses and Kotoko, by our pedigree, accentuated Ogum’s traits.

Ogum must stay at Kotoko for now. We shouldn't have any debate on his future. He has a running contract. He hasn’t also done anything to warrant even a pondering over his stay. If we're to make any meaningful impact in Africa, aside all other things, the club needs coaches of Ogum’s caliber to think, research, plan, and implement proper strategies to plot our return to highly competitive play and desired results, surely not immediately but then the work should start now and with coaches like Ogum.