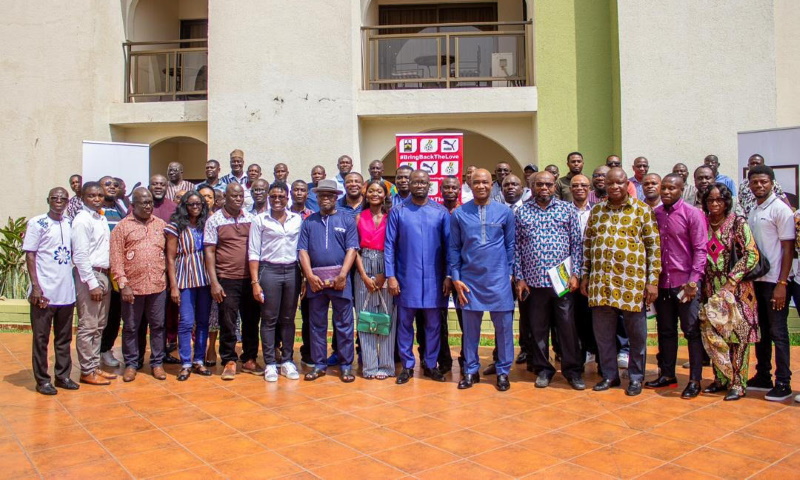 I have always known that football is more than just the game played on the field. It is an incredibly powerful weapon that can be deployed effectively to drive a cause, tackle a societal problem, impact lives, win an election, halt a war, resolve crisis, make a political statement, and even change the world.

Once again, it is the ‘changing of the world’ aspect that continues to intrigue and interest me, as I understand the world better. To do any of these things requires a good understanding of how the world works, and how football’s power can be deployed.

Ghana, Nigeria’s West African neighbour and keen rival in sports, have just changed the coaching crew of all their 9 national teams including their global flagship team and product, the Black Stars.

By so doing they have made a simple but deep statement to the rest of the world reflecting who they are and where they belong in the ongoing global war of civilisations, between the superpowers. Ghana may be a small country on the planet, but it has a very rich political history, deeply rooted in the African culture.

From its first President at Independence in 1959, it started to lead Africa in driving a vision that would make Africa and Black persons a force to be reckoned with in the world, with his vision of a united Africa, a continental cultural, social and economic integration, a massive unprecedented infrastructural development across the African continent, and the establishment of a global Black and African movement to fight in the war of civilisations. Clearly, Dr. Kwame Nkrumah was way ahead of his time. Very few other African leaders understood him and saw what he saw about ‘tomorrow’.  He is probably the most visionary leader in the history of African politics.

Since after Dr. Nkrumah, Ghana has gone through several other leaders with varying degrees of the vision and success at making their country the centre-piece and model of African development. Despite all the turbulent political upheavals the country has gone through, seeping through all of their experiences is a country and a people that are very civil, very educated, very culturally sound, very sophisticated, very proud of their heritage, very civilized in their conduct and very aware of their rightful place in the world.

At this time in their history, they have a leader in Dr. Nana Addo who encapsulates the spirit of Kwame Nkrumah. He has embarked on a remarkable journey that clearly shows a man of history. How do these things connect with the simple step of changing a coaching crew of their country’s national football teams? In Ghana, football is a very important product. The people take it seriously. Everyone is involved in it. Dr. Kwame Nkrumah was crazy about football. He was the Black Stars’ greatest fan.

I met Dr. John Kuffour, President in the early 2000s in the State house in Accra. ‘Mr. Mathematical’ he called me as soon as we met. He knew football intimately and a former Chairman of one of Ghana’s biggest clubs – Accra Hearts of Oak. I saw a sitting Vice-President of the country at a football match between the academicals of Nigeria and Ghana some years ago at the Accra Township Stadium.

He came to watch with a lone friend, arriving the stadium unannounced and without any convoy of cars. The current President, Dr. Addo, I am told, is a supporter of one of Ghana’s top teams (Ashanti Kotoko).  Every Ghanaian supports a local football team. The passion for football in Ghana is as much as that.

Nigerians love football, but I must confess, that Ghanaians support the game more, love their local clubs more, and do much more for the game and for players than Nigeria has ever done. Ghanaians actually believe they know the game more and would never concede that Nigeria has a better football culture and that the Super Eagles are ever a better team than the Black Stars. Ghanaians believe their style of football is more advanced than Nigeria’s.

That’s why the rivalry between both countries in football is one of the keenest on the African continent. The statistics of the head-to-head between both countries at senior national team level, however, speak volumes. Ghana are way ahead of Nigeria, 25 to 13 victories (or so), since 1950 when they first met.

So, what has the change in the coaching crew of the national teams of Ghana got to do with the prize of fish in the markets of Oshodi? Well, let’s examine the ‘statement’ that Ghana made in their choice of new coaches for the national teams. Their choice is connected to their vision of a new world order.

The current President of Ghana, Dr. Nana Akufo Addo  is a champion of the cause of the Black race and of Africans in the world, in the footsteps of late Dr. Kwame Nkrumah. I listened to his speech to the Congressional Black Caucus in the United States of America when he became president, how he marketed Ghana to the African-American people as the ‘home’ they should return to and partner with in the building of a new Black civilization on earth. I watched on television when traditional chiefs in Ghana addressed a gathering of Black and African-American tourists in Ghana, apologizing for the role played by their forefathers in capturing, selling and shipping their healthiest Black brothers and sisters into slavery to the land of no return. I watched as Ghana offered Blacks and African-Americans land to come and resettle, incentives to come and invest, and free passage to and from Ghana, and place they can now truly call their home. Ghana is way ahead of every other Black and African country in attempting to fight the war of civilisations by restoring the dignity of the Black race and earning global respect.

Were Ghana to be in Nigeria’s shoes, have Nigeria’s population, human capital and resources, this battle would have been won a long time ago. Ghanaians see it clearly, Nigerians, unfortunately, don’t. That’s why Ghana’s choice of local Ghanaian coaches to lead their national teams is significant and makes a bold statement. The racism ‘war’ is escalating in Europe, on the football fields, mostly against Black footballers. It has refused to go away. Attempts to eradicate the cancer from football have been half-hearted and have largely failed.

Blacks are not given any opportunities to do anything beyond play the game because they are considered not intelligent enough to manage a ‘complex’ game like football! Bull…t. Then enters the International Olympic Committee, IOC, this week with its own rules aimed at silencing protesting athletes at future Olympic Games. Who are the protesters at the games? Go check history. They are mostly Black athletes protesting inequality, racism, discrimination, and other moral scourges. Blacks are to be silenced again!

Blacks and Africans must fightback and earn their rights to be equal partners in the present lopsided world. That’s why Ghana’s decision to sink or swim with their Black indigenous coaches makes absolute sense. Even when they weigh the contributions of the foreign coaches they have engaged, 23 of them compared to 8 locals in their 51-year history, the most successful coach in Ghana’s history is a local, CK Gyamfi, who won three African Cup of Nations for Ghana!

Since 2012, Ghana has kept faith with local coaches starting with James Kwesi Appiah. His results have been mixed, but his replacement is another Ghanaian, another ex-international, and former Captain of the Black Stars, Charles Akunnor. He and 8 other local coaches take over all the various national teams in the country, and the people are prepared to sink or swim with them for a cause higher than just playing football.

I hope other African countries will take a cue from Ghana, for football is much more than the game played on the football field.