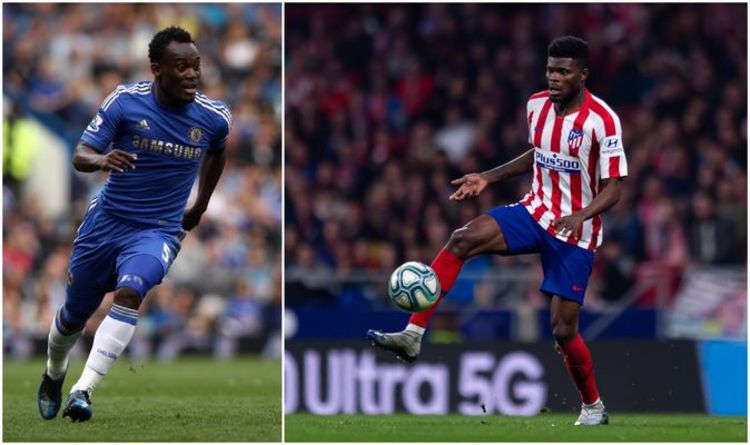 Frankly, beyond the fact both share the same nationality, putting them side by side can only be attributed to recency bias, a common flaw in football-centric debates.

Essien was a box-to-box midfielder in his pomp, while the Atleti star is a measured midfield anchor whose proficiency at initiating attacks from deep has made him indispensable in Diego Simeone’s set-up.

The former largely played in a midfield three at Olympique Lyonnais and then later Chelsea, whereas Partey’s growth in the last two years or thereabouts has been in a compact 4-4-2 in the Spanish capital.

Their profiles are notably different, so beyond being Ghana midfielders representing some of Europe's biggest clubs, there's a limited practical relevance to a direct comparison.

What Essien would do by having to exert some physical input, Partey can achieve by simply looking up and picking out a pass.

That’s not to say the former Lyon dynamo wasn’t a decent passer of the ball himself. The ex-Blues midfielder’s passing was indeed underrated, still, he wasn’t blessed with the same passing range exhibited by the well-rounded 26-year-old.

If anything, this only emphasises the players’ different profiles. Essien, a ball-carrying midfielder in his heyday, leaned more on his passing after several injuries slowed him down, while the Atletico man is capable of line-breaking passes at will.

While not being disingenuous to the current star, many observers seem to forget how good the former Ghana international was in his prime. The West African was one of those who revolutionised the role of box-to-box midfielders in Europe in the 2000s during his spell in France and early doors at Stamford Bridge.

The Bison won two Ligue 1 titles with Les Gones and was voted the championship’s best player in his final season at the club in 2005.

A year later, an impressive first year at Chelsea saw him named BBC African Footballer of the Year in 2006. Essien may have never won the Caf award, still, he featured in the final three for five successive years between 2005 and 2009.

Given awards are usually dominated by attackers, it’s the ultimate compliment to have had a midfielder thrown into the mix for those five years and in another era, might have won the honour at least once.

Also, the then-Chelsea star made the Caf Team of the Year four times and was nominated for the World Player of the Year and Ballon d’Or for three years on the spin from 2005 to 2007.

This is who Partey is up against; a guy who was terrific at his best and was, without a doubt, one of the best players in his position.

A Black Star who won four-time league championships in France and England, as many FA Cup titles and that 2012 Champions League, Essien’s greatness would take some beating.

Be that as it may, Partey’s progression from rotational option to arguably most important midfielder for Los Colchoneros in the last 24 months has been stellar.

His well-rounded nature means he’s not only capable in possession but similarly adept without the ball. While the latter is somewhat par for the course given he plays in a Simeone side, the Ghana star’s importance in the team’s build-up play is not spoken of as often as it should.

Partey’s proficiency at finding teammates between the lines sets the Red and Whites on many of their attacks as he acts as their playmaker from deep positions.

The midfield man rarely succumbs to being pressed and often plays his way out of trouble when opponents seek to win the ball in dangerous positions.

Now 26, and in his prime, the Atletico man neither has the individual nor collective titles to show for his undoubted ability. For context, Essien had moved to Chelsea at the same stage and was widely regarded as one of the best at what he did.

Truthfully, Partey still has a bit to do to match the iconic Ghanaian as regards individual recognition and trophies, and whether he supplants the ex-Blue star remains to be seen.