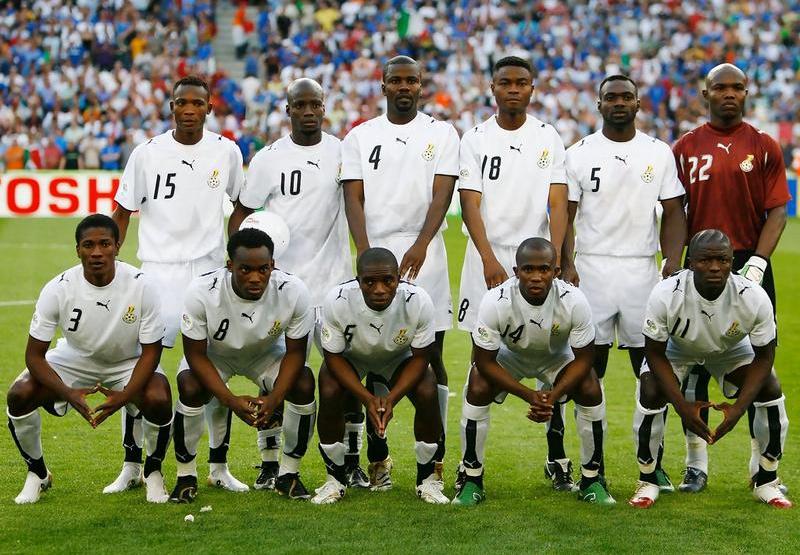 Ghana's starting team for the game against Brazil on Sunday, June 12, 2022, marked 16 years since Ghana played their debut match at the World Cup. It was the 2006 World Cup and the game was against the Azzuris of Italy.

Ghana over-achieved in the tournament, making it out of a group with Italy, Czech Republic and the United States of America who were all ranked in the top ten of world football then.

The team brought happiness to the homes of Ghanaians with their performance in the two victories over USA and Czech Republic.

16 years on, where are those players?

Sammy ‘Bamako’ Adjei was the second-choice goalie for the Black Stars. After keeping the post in the qualifiers, Sammy Adjei lost his place to Richard Olele Kingson.

He has since retired and is currently the goalkeepers’ trainer for Kenpong Football Academy.

The now 44-year-old man had a fantastic tournament, pulling off some great saves in the four games Ghana played at the tournament.

Olele has retired from football and is the goalkeepers’ trainer for the Black Stars and Accra Great Olympics.

George Owu last played in the Ghana Premier League for Ashgold and not much has been heard of the 40-year-old goalkeeper.

Hans Adu Sarpei was part of the team. After the tournament, Sarpei continued his game in the German Bundesliga.

He has retired from football and is now into full-time coaching in Germany.

Pappoe on the left, Paintsil on the right, that is how Ghana’s lateral defenses were set up in the World Cup.

John Paintsil’s career soared after the World Cup. After sojourns in England, Israel, South Africa and the likes, Paintsil has hanged up his boots.

He now owns a club that he coaches.

John Mensah after playing for the likes of Sunderland, Olympic Lyon and the rest has given up on his career and is now leading a very private life.

Kuffour’s last-ever Ghana game was against Italy at the World Cup. The experienced centre back made a mistake that gifted Italy their second goal and that was his last action in a Ghana jersey.

Kuffour is doing well after retirement and has served in various roles in Ghana football. He is currently a member of the management committee of the Black Stars.

The full-back enjoyed some games in the tournament but did not really impress Ghanaians.

The last heard of Addoquaye Pappoe was when he returned to Liberty Professionals in 2013. He has presumably hanged his boots.

Illiasu was Ghana’s surprise package in the tournament. He went into the tournament with little reputation as one of the local players in the team. The then King Faisal defender was drafted after Sammy Kuffour’s howler and proved everyone wrong.

After touring the world for sometime, Illiasu has now retired and is now a big time farmer in Tamale.

Eric Addo was also ever-present in the Ghana team and played in all four matches. He plied his trade mostly in the Dutch league for PSV Eindhoven.

Eric Addo is into coaching now and is now a member of the technical team of the Under-21 team of PSV Eindhoven.

Daniel Quaye was one of the local players in the team but did not kick a ball for Ghana.

After the World Cup, the former Hearts of Oak defender played in the GPL and the Chinese league.

Dan Quaye has retired from football and is now into coaching.

Issah Ahmed was a regular for the Black Stars until the 2006 Africa Cup of Nations where he made a number of errors in the game.

Issah Ahmed did not play at the World Cup but was key for Kotoko.

Habib Mohammed made a couple of appearances for Ghana at the World Cup and played a strong supportive role in the games.

The 38-year-old played for Asante Kotoko, Ashgold, FC Molde but has now retired.

In a recent interview, Habib said that he prefers local coaches to foreign ones when it comes to the Black Stars.

Boateng came on for Ghana in the game against the United States and played incredibly well. He was great for Ghana and made an appearance at the World Cup.

He has retired and is now a scout for Right To Dream Academy.

The legendary Michael Essien is no longer in active football though he is yet to officially announce his retirement.

Tornardo was the captain that led Ghana at the World Cup. Appiah has hanged his boots and is now a member of the management committee of the Black Stars.

Appiah is fondly remembered for his pass to Asamoah Gyan in the game against Czech Republic and his goal against the US which came with a unique celebration.

He has played ambassadorial roles for a number of brands.

Sulley was a key member of the squad and scored a powerful goal against the Czech Republic.

The lanky winger played a bit-part role in the tournament with a couple of appearances.

Otto Addo, now 37 is the current coach of the Black Stars. He qualified the team to the 2022 World Cup in Qatar.

The highest point in Dramani’s career is probably the goal he scored against the United States.

Dramani was handed a surprising start and did well to get a solo goal for Ghana.

Dramani last played for FCI Tallinn in the Estonian league.

He was recently spotted at the match between Accra Great Olympics and Hearts of Oak.

Gyan scored two goals for Ghana at the tournament and is currently the African player with most goals in the competition.

Gyan is yet to retire from the football as he is eyeing a last dance at the World Cup.

Matthew Amoah who did well in the qualifiers had limited time in the main tournament in Germany.

He made 43 appearances for the national team, scoring 13 goals.

He is currently a coach of the youth team of NAC Breda where he is a cult hero.

Razak Pimpong made three substitute appearances in the tournament and did well with his aerial ability.

He has retired from football and was at some point a TV pundit in Copenhagen.

Alex Techie-Mensah was in the team but did not make any appearance at the tournament. Techie-Mensah endured an injury-blighted career and ended his career quite early.

He went into coaching and last coached Switzerland division two side Kreuzlingen.