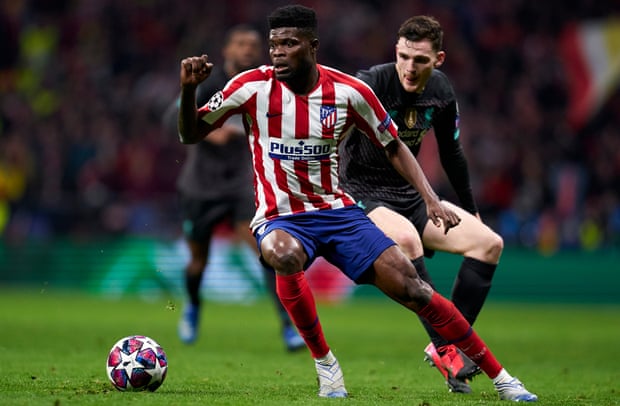 And then there were eight. There are three games to get through for Champions League glory, two less than there would usually be. But, in the new world post-Covid-19, nothing as it should be.

For the first time in 10 years, Europe’s premier club competition has a quarter-final line-up with neither Juventus nor Real Madrid. There are two Ligue 1 sides in the final eight. The only Italian side left are debutants Atalanta.

Amid all the uncertainty, however, there remains a strong African presence in the competition still, and so the odds of at least one of the continent’s superstars getting his hands on Ol’ Big Ears is reasonably high.

Here, in order, are Africa’s strongest bets to go all the way and lift the Champions League at Estadio da Luz on the 23rd of August.

After the heartbreaks of 2014 and 2016, it feels like this might finally be the year Atletico cross the Rubicon in the Champions League.

For one thing, there is no Cristiano Ronaldo, the one-man flaming sword and cherub barring them from the ultimate goal. Since Diego Simeone has been in charge, Atletico have only ever exited the competition in the knockout stages to a club featuring the Portugal forward. Following the elimination of Juventus, the Argentine manager can start to believe.

As always, Los Colchoneros are built on the tactical cohesion that Simeone demands out-of-possession. Ghana midfielder Partey plays a key role within this approach, occupying the area in front of the defence and also possessing the composure to retain the ball and help the team transition up the pitch.

If there is a weakness with Atleti, it is to do with the attack. They simply do not have the same firepower as some of the other teams left in the competition; one has only to look at their repurposing – successful though it has been – of defensive midfielder Marcos Llorente as an ersatz striker.

That said, this will hardly matter if they do not concede. There is just a sense that circumstances this peculiar will be to the benefit of teams that are able to avoid mistakes, seeing as the absence of a return leg magnifies the impact of errors on the overall outcome. A well-drilled side with discipline and an almost canine sense for opposition weakness – see how they returned from the brink to pounce on Liverpool in extra-time and turn their Round of 16 tie around – is impossible to look past.

If this isn’t the season for Pep Guardiola, when will it ever be?

Not since 2011 when his ridiculous Barcelona side cut Manchester United to ribbons at Wembley has the Manchester City boss tasted success in this competition. It has not been for want of trying.

Their defeat of Real Madrid in the Round of 16 provided City with arguably their finest night in European football ever, and so one can imagine they will approach the prospect of a meeting with Lyon with complete confidence.

At their best, there are too few teams that can live with Guardiola’s side, so good is their attack – comprising Mahrez – at cutting through opponents, and only Bayern Munich have scored more goals than they have in this season’s competition. They force the issue as well: their pressing of Zinedine Zidane’s side on Friday provoked a catalogue of errors from some of the finest footballers in the world.

They do, however, possess two key disadvantages: one is the absence of Sergio Aguero, without whom it just seems they need to work too hard to score; the other is a soft underbelly in the form of a defence that is far from settled.

They may have coasted past Real Madrid in the end, but the ease with which Karim Benzema rose, unchallenged, to head home at the Etihad will offer some encouragement to the opposition.

Yet another club that has spunked a sizeable fortune in search of the Holy Grail, PSG have a unique opportunity to win a first Champions League title.

It would appear that the stars have aligned for them in an undeniable way.

For one thing, there is the draw: they are in the 'weaker' half of it and are therefore able to escape the attentions of the only two former winners left in the competition. Then there is a meeting with a dangerous Atalanta side that will, nevertheless, give up chances. In other words, the perfect sort of opponent for them to make hay against.

There is also the fact that, with Gueye, they finally have a midfield enforcer with the authority to complement their more carefree talent in attack.

They will, nevertheless, miss the lepidopteran talent of Marco Verratti in the middle of the park, and there are doubts over the full fitness of Kylian Mbappe, who went off injured in the Final of the Coupe de France last month following a horrendous tackle by Loic Perrin.

In addition to all that uncertainty over the selection, their mentality on European nights will also come in for examination. The limp manner of their defeat in the Round of 16 first leg against Borussia Dortmund, for instance, left a lot to be desired and suggested manager Thomas Tuchel is well capable of getting his initial approach wrong. This time, however, there will be no do-overs.

The club from Bergamo have been the big surprise of the tournament this time around, and have captured the imagination in Serie A as well.

Gian Piero Gasperini has his side playing a bold, ‘controlled chaos’ style that holds back for no one. This has helped them to consistently punch above their weight and overwhelm teams, and also means that, in a one-off match, they are a dangerous proposition.

With Atalanta often committing as many as seven bodies into attack (the front three, the wing-backs, and even the outside centre-backs in their back three), a great deal of responsibility is entrusted to the deep midfielders – Tameze, Marten De Roon and Remo Freuler – to screen counter attacks.

When it comes together, it can be enthralling to watch. They created chance after chance in their evisceration of Valencia over two legs in the Round of 16. However, if that tie demonstrated anything, it is that even when Atalanta are purring, they can still give up a high volume of chances themselves to the opposition. Their strength is also their weakness.

Also, they will have to negotiate the rest of the competition without influential forward Josip Ilicic, who scored four times against Valencia. He has been granted leave to return to Slovenia for personal reasons, and without him, La Dea just aren’t quite the same.

Still though, they remain a threat against anyone on their day, and that might well be enough to carry them through.

Manager Julian Nagelsmann has proven himself remarkably adaptable throughout his coaching career, but there is no mistaking the distinct feature of this Leipzig side: pressing.

They shrugged Tottenham aside in the previous round, managing to make last year’s beaten finalists seem depressingly ancient in their approach by comparison. It is not a look that Spurs boss Jose Mourinho enjoyed.

The German side win the ball high up the pitch and are also dangerous in transitions. Key to this is their all-action midfield, where Haidara plays an important role with his energy as well as his ball-carrying. Some of their movement in attack, as well as the use of their full-backs, makes for a very thrilling watch.

That said, the loss of talisman and top scorer Timo Werner will no doubt be a huge blow to them. It may very well open the door for Lookman to feature more, and indeed that role – on the left of an attacking three by positioned in-field – is one that suits him perfectly. Still though, it is a depletion that will be almost impossible to surmount, especially considering they are drawn to play the miserly Atletico next.

Still, perhaps it won’t matter if their pressing is on-point. In a frenetic, high-tempo match, they may well be able to upset the odds.

A famous win over Juventus in the previous round has Lyon up in the Champions League nosebleeds.

The French side needed to come through a nervy second leg in Turin, but ultimately they made it through at the expense of their more illustrious opponents.

It is difficult to get a read on Lyon with respect to their style: they can be thrilling in attack, with Memphis Depay, Moussa Dembele and Toko Ekambi and Traore all capable of unlocking defences in full flow; however, they are just as capable of battening down the hatches, as was evident at the Allianz Stadium.

No doubt, they will need to reprise their parked bus against Manchester City in the next round if they are to progress. They can, however, draw encouragement from Monaco, who three years ago put City out with a display of nerveless attacking. It will be fascinating to see what approach Rudi Garcia opts for.