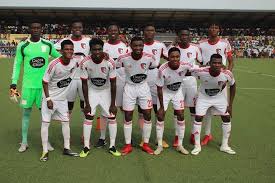 WAFA aim to end their four game drawing streak as they prepare for a clash with league leaders AshantiGold in Sogakope.

The Academy boys have found wins hard to come by. They have recorded just one victory in their last nine league games (1W 7D 1L). In their last league match, they were held to a 1-1 stalemate by Eleven Wonders in Techiman.

The Sogakope-based side are now 8th on the log with 16 points and a victory against AshantiGold will be a huge statement.

AshantiGold look to hold on to their top spot as they prepare to lock horns with WAFA.

The Miners are on an impressive five game unbeaten streak (3W 2D). They also boast of the best defence in the competition having conceded just two goals in 11 matches.

The Obuasi-based side need to up their scoring game however having scored 9 goals so far, the worst record among the top five. They have amassed 21 points, at least one more than anyone else.

In their last seven battles, AshantiGold have come on top with three wins and two defeats (W3 D2 L2).