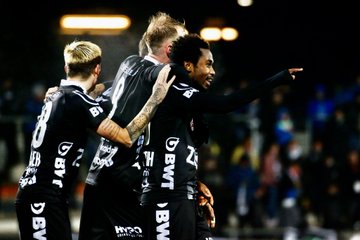 Ghanaian forward Samuel Tetteh has revealed he is relishing his reunion with Red Bull Salzburg – but says he is excited he is facing his parent club.

Tetteh, who is on a season-long loan from Salzburg is preparing to line up against them in a top of the table Austrian Football Bundesliga clash on Friday night at the Red Bull Arena.

Salzburg are currently top of the table with 44 points, two points adrift second-place LASK after 18 games, making the tie a must-win for both teams.

Speaking ahead of the game, the 23-year-old says his loyalties lie with LASK and is looking forward to the game.

"Playing against Redbull Salzburg tomorrow has me in a bit of mixed feelings but mainly excitement because I get to see my former teammates on the pitch again but this time with my new family (lask Linz) as their opponent," Tetteh said in an interview with Graphic Online.

"As to who I’m supporting, it’s obviously LASK because it is my current home. My love and prayers are with my new family and I am going to play with all my might to ensure we sing the victory song at the end. However, I wish Redbull Salzburg all the best in our game".

He has scored four goals and registered five assists in 27 appearances for LASK so far in term.