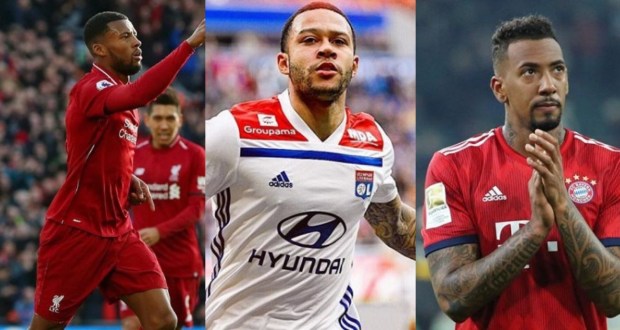 Going from Gerard Asamoah and Marcel Desailly, there were plenty of Ghanaian-born players who decided not to wear the national team shirt throughout their successful careers.

However, the country was always packed with highly-talented names and such an absence did not leave significant consequences on the team’s results. Ghana were regular World Cup participants over the last two decades, but they missed out on the 2018 edition, hosted by Russia.

For the first time in a while, we can discuss the lack of talent as it is hard to find a genuine Ghanaian star in European football at the beginning of the 2020s. This is why, with the help and support of the experts at bettingtips4you.com, we decided to create a list of players who would have been of massive help for the current Ghanaian team had they decided to play for their parents’ country.

The 27-year-old defender is a first-team regular for Nantes. He made a move to Les Canaris in the summer of 2019 after spending three years in Anderlecht.  Dennis is the kind of a player all coaches appreciate as he can easily fill the gap in every position at the back. He spent the entire youth career playing for the French national side, earning caps for the U16, U17, U18 and U21 team. A centre-back playing regularly for a team in the middle of the Ligue 1 standings would n doubts be a huge addition to the current Ghana squad.

Speaking of the centre-halves, Jerome Boateng is probably the biggest name on the list. The “German” veteran has been the heart of Bayern Munich’s defence for the last nine years. He won the World Cup 2014 being a vital part of Die Mannschaft’s rock-solid back line alongside Mats Hummels. He also won the 2012/13 UEFA Champions League with the Bavarian giants. He represented Germany on more than 70 occasions. Interestingly, his younger half-brother Kevin-Prince Boateng still plays for the Ghanaian national team.

Son of the former Arsenal and WBA player Kwame Ampadu, Ethan chose Wales over England, Republic of Ireland and Ghana. He made his international debut for the U-16 English team but quickly switched for Wales. By now, the young centre-back made 17 appearances for the Dragons following his 2017 debut. He currently plays for RB Leipzig on loan from Chelsea as Frank Lampard did not use him at all in the first half of the 2019/20 season. Overall, the youngster made just one appearance for Chelsea (in 2017) and is yet to score his maiden senior goal.

Tettey is 14 years older than Ampadu, but the current Ghanaian team would no doubts love to have a Premier League player in their ranks. Tettey is actually one of the rare players from this list who was born in Ghana but moved to Norway where he spent the entire childhood. The defensive midfielder spent his entire professional career in three clubs (Rosenborg, Rennes and Norwich City). He made a move from Rennes to Norwich City in 2012 and has made more than 220 appearances for the Canaries since then. He made 34 appearances for the Norwegian national team but has not earned a call-up since 2017.

Liverpool's central midfielder is among the best players on the list. He has been enjoying a fabulous form in the last couple of years. He won the 2018/19 Champions League with the Reds and is on the best way to clinch the Premier League silverware in the 2019/20 season. Georginio, who was born and raised in Rotterdam, scored 18 goals in 62 appearances for the Dutch national team. He also won Eredivisie with PSV and made it to the UEFA Nations League final with Oranje. A player of his qualities would make all the difference in the Ghanaian team.

At the age of 19, Callum has prospects of being the future star of the game. He made a breakthrough with Chelsea in the 2018/19 season and continued to shine for Frank Lampard’s side at the beginning of the 2019/20 campaign. Being still a teenager, Hudson-Odoi can be proud of more than 30 appearances for one of the most famous English Premier League clubs. Sadly for Ghanaian football admirers, Callum has already made his debut for the Three Lions and will represent the English national team in the future.

Mario’s parents are both Ghanaians, but he was born in Palermo and spent an international career defending Italian colours. Mario Balotelli was an extremely promising prospect 15 years ago. He used to play for the giants such as Inter, Milan, Manchester City and Liverpool at the peak of his career. Balotelli is still active in the elite class of Italian football, but can't quite be proud of the form in Brescia. Even though he would probably sit on the bench in an ideal Black Stars team, his immense experience at the highest level could be of help in some important affairs.

Born in 1994 to a Ghanaian father and a Dutch mother, Memphis Depay spent his entire childhood in the Netherlands. It was hard to believe that he would ever wear a Ghanaian shirt, but he certainly has connections to this African country and would certainly play a pivotal role in the present time. In the real world, though, Memphis captains Ligue 1 giants Lyon and is the No 1 striker for the Dutch national team. Depay bagged 43 goals in 101 appearances for Les Gones and he is yet to reach the peak of his career.

We will complete the list with another high-profile striker. Inaki Williams was born in 1994 in Bilbao to Ghanaian immigrants He became a star in Bilbao making more than 200 appearances for one of the two biggest Basque teams since the debut in 2014. Interestingly, he made a debut for the Spanish national team in 2014 but has not earned any additional cap for La Furia Roja. Inaki would make a deadly attacking duo together with Memphis Depay. If you fancy betting on goalscorers make sure to check bettingtips4you.com for the latest promos.