Ghana and Red Star Belgrade striker Richmond Boakye Yiadom has returned to full training ahead of his side's league game against Proleter Novi Sad on Saturday.

Boakye Yiadom has been on the sidelines since suffering a knock at training some days ago, but he has fully recovered and trained with his teammates ahead of the league game. 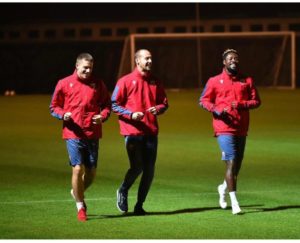 Reports in the media local indicated that the striker was excluded from Kwesi Appiah's 23-man squad ahead of the 2021 Africa Cup of Nations qualifiers against South Africa and Sao Tome and Principe due to injury.

But reports in Serbia has revealed that Boakye Yiadom is not injured and has been training with his club.

The 26-year-old will be available for selection against Proleter Novi Sad in the Serbia Super Lig.

Boakye Yiadom is one of the top performers of Ghanaian players abroad, having scored four goals in nine games for Red Star Belgrade in the UEFA Champions League so this season.