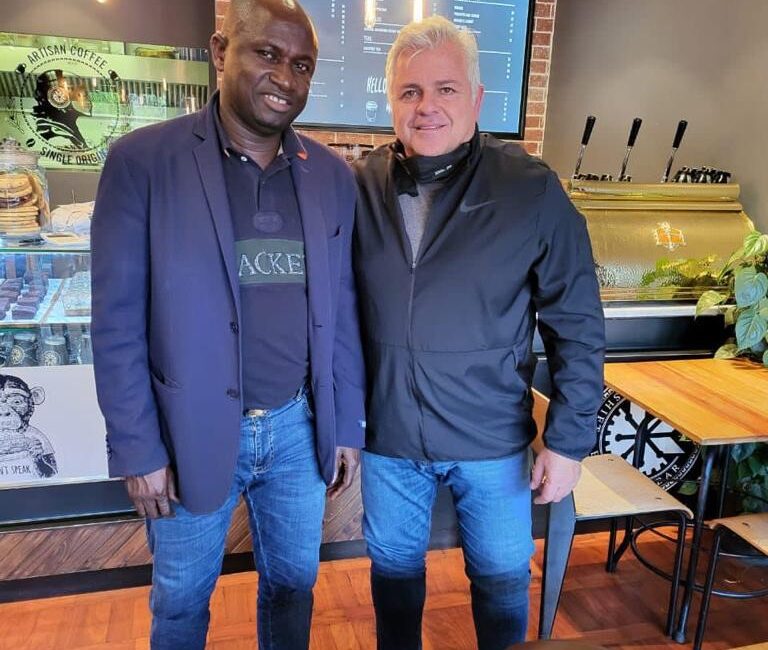 The President and owner of Medeama SC, Mr. Moses Armah, popularly referred to as Mospacka has met with the Chairman and Owner of PSL club, Cape Town City Football Club, John Comitis in South Africa.

The bilateral meeting of the two business moguls was among other things to establish close links, share their rich experiences in the game, and lay professional and solid foundations that will see both sides conduct businesses, ranging from player transfers, coaching, managerial support, etc.

As part of the visit, Mr. Armah visited the Hartleyvale stadium where the South African club trains and also the 5500 capacity Athlone Stadium which is the home grounds of John Comitis’s club. Cape Town City FC and the club’s secretariat or head office.

The Yellow and Mauves owner is expected to implement some of the modules and policies especially the business development models upon his return to solidify the already existing structure of the Tarkwa-based club; so as to make Medeama more viable and profitable.

Mr. John Comitis, one of the top 5 richest South Africa Premier Soccer League club owners until 2016 was a co-owner of Ajax Capetown football club with Rob Moore but sold his shares to own Cape Town City FC in 2016.

The Citizens or Blue and Gold Army as the club is nicked named was formed in 1962 but reformed by John Comitis in 2016 and has since been a regular feature in the PSL, winning the Telkom Knockout Cup in 2016 and the MTN 8 in 2018.