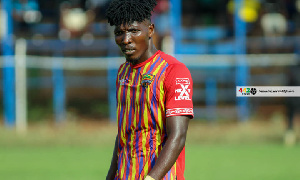 Hearts of Oak legend Bernard Don Bortey has called on the management of the club to re-sign midfielder Benjamin Afutu ahead of next season.

The enterprising midfielder left the Phobians after helping the club to win the 2020/21 Ghana Premier League season.

He is currently without the club after terminating his contract with Egyptian Premier League side Eastern Company FC.

According to reports in the local media, the midfielder would want a return to the rainbow boys ahead of the 2022/23 season.

In an interview with Kumasi-based Wontumi FM, Don Bortey called on the hierarchy of Hearts of Oak to consider resigning Afutu despite his painful exit.

“I understand supporters of the club are calling on management to re-sign Benjamin Afutu, he was an exceptional player for the team but he forced himself out of the team.  Patrick Razak left the club same way so people had to get involve on his return to the club.

“Afutu is a proud Phobians, so if they will welcome him back into the team, they should go ahead and do it. He is back in the country and if he has apologized for any wrong doing they should forgive him”