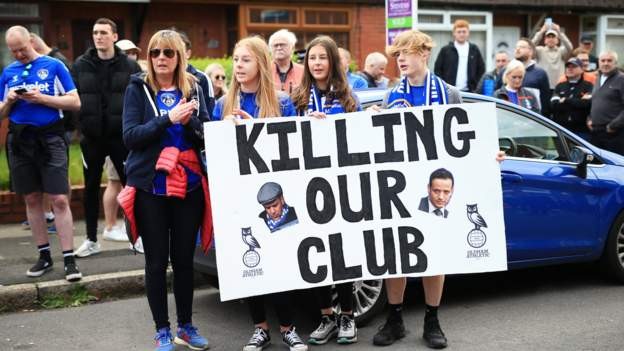 Fans alienated. Protests held. Results worsened. A 116-year stay in the Football League ended. The 2021-22 League Two season is one that will live in the history of Oldham Athletic for the wrong reasons.

At the end of a tumultuous campaign, a second relegation in five seasons was the culmination of years of decline.

It cost them their place in the EFL and meant the Latics picked up the unenviable statistic of becoming the first former Premier League club to drop out of league football.

But how did they get to the lowest point in their history? BBC Radio Manchester spoke to those who know the club best to find out what went wrong and how things might change for the better.

As battles against the drop go, the manner in which Oldham were relegated was particularly galling for their supporters.

Needing to win to boost their hopes of survival, the Latics took on local rivals Salford City on 23 April. But with closest rivals Barrow and Stevenage both winning, avoiding defeat was the minimum requirement.

However, with Oldham trailing 2-1 with 14 minutes still to play, fans stormed the pitch in protest against owner Abdallah Lemsagam. It was the latest in a series of protests during his near-five-year tenure at the club.

Referee Bobby Madley took the players off the pitch, with the remainder of the match being decided behind closed doors about an hour later. The final whistle at an empty Boundary Park sealed Oldham's fate.

The National League beckoned. Some way to end more than a century in league football.

Asked whether he feared for the future of the club, legendary former Oldham striker Andy Ritchie said: "I do. They need somebody to come in and put a few bob into the club. I know the owner has kept the club afloat when he came in but they need more guidance and stability.

"It makes me feel distraught. It's going to be hard to get back out of there."

'We needed to win or the club would go under'

Relegation to the National League marked a huge fall from grace for the Latics. Under Joe Royle they had been founder members of the Premier League, League Cup finalists in 1990 and Wembley FA Cup semi-finalists as recently as 1994.

Thirty years on from the anniversary of the breakaway top flight, Oldham will now prepare to play football outside of English football's top four divisions.

But their fall has not been sudden. They have not finished in the top half of a division since 2009 and spent 21 years in the third tier before being relegated to League Two in 2018.

In the aftermath of their latest relegation, the board said they were "devastated" and that their immediate aim was to restore their place in the EFL.

Boss John Sheridan, currently in his sixth spell as the club's manager, said he will oversee the bid to secure a return to League Two at the first attempt.

However, there were financial challenges at the club since before Lemsagam's arrival.

Former boss Lee Johnson underlined the importance of winning an FA Cup replay against Mansfield in late 2013 in order to set up a lucrative third-round tie against Liverpool.

"I was told 'look, if we don't win this game at Mansfield away, the club could go under'," he said.

"Now whether that was fact or that was a motivational technique I'll never truly know but, at the same point, it was worth about £300,000 or £400,000 in revenue to get to that Liverpool game.

"We went 1-0 down at Mansfield and, honestly, the responsibility for that team talk at half-time on my shoulders. We ended up winning the game 4-1 and going to Anfield and having a really good day there.

"Even when I left [to join Barnsley in 2015], a big reason for that was the transfer fee for me and that was required for the football club. These sorts of things don't come out all the time. Sometimes you can be vilified but it was important for the club to get that cash injection."

'You have to give managers time'

Lemsagam took over Oldham in January 2018 and under his stewardship, he has faced the ire of supporters, who have ramped up protests against him over the past couple of years over his running of the club.

Since his arrival at Boundary Park, the club have had 10 managers, with one of the recurring themes being suggestions of interference with recruitment and team selection by the club's sporting director - and Lemsagam's brother - Mo.

Richie Wellens was manager at the time of Lemsagam's arrival as owner, but left the club at the end of the 2017-18 season.

"You have to give managers time, allow them to do the recruitment, allow managers to have the say on who's playing and not always have a pressure from above on who to pick or what system to pick or what signings to make," said Wellens.

"Sometimes even if it's not a 'you have to sign him', even if it's little suggestions, as a manager you don't need that.

"There's so many pressures as a manager, you don't need the little comments or visits to your office every two minutes."

Abdallah Lemsagam (left) said Paul Scholes "will have my backing, 100%" when the Manchester United legend was appointed manager - but the former England midfielder lasted just 31 days in charge of Oldham

After Wellens, managerial appointments have come thick and fast under the Lemsagam brothers, with some big names pitching up for short stints with the club.

"It's impossible to do the job. If you consistently have this over years and years then there's only one way the club will go and that's on a downward spiral.

"I had my last day of the January window the year we went down. We had tried to make a couple of signings that hadn't come off.

"I'm driving to the training ground [the following day] and I've heard that we've signed somebody called Wilfried Moimbe. Do you think I'd gone to France and scouted him? No, I'd never heard of him in my life. Two days later he's playing in a game in my first team."

It is not just football-related matters that have dogged Lemsagam's time as owner of Oldham Athletic.

A dispute over player wages during the coronavirus pandemicexternal-link and an ongoing strained relationship with former player David Wheater overshadowed a stagnant few years for the club on the pitch.

There has also been a long-running dispute over the ownership of Boundary Park, as well as its seven-year-old North Stand, which has rumbled on between Lemsagam and the club's former owners Simon Blitz and Danny Gazal during the Moroccan's tenure.

Through their company Brass Bank, Blitz and Gazal issued a lease on the ground to the club when former co-owner Simon Corney took sole ownership of the Latics in 2011.

Legal issues continue over unpaid rent on the stadium, as well as safety concerns over the North Stand, leading to the stand, now named after legendary former boss Royle, being closed and re-opened over the past few years as large parts of the ground lie unoccupied on matchdays.

"When we were leaving in 2011, we discussed the fact that football has to stay at Boundary Park whether Simon Corney stays or sells on, which he did," said Blitz.

"At that stage the ground was, and still is, up for sale to any prospective buyer. Hopefully the owner would buy the stadium at the same time and that is still the case today.

"Anybody wishing to buy the football club who wants to buy the stadium is more than welcome at a very competitive price."

The row between Lemsagam and the club's former owners came to a head in 2020, with the club making an official complaint to Greater Manchester Police,external-link revolving around funds supplied to build the North Stand.

Two years on and the issue continues, with Oldham currently dissatisfied with safety arrangements for the stand, leading to it being closed.

When contacted by BBC Radio Manchester for comment, Oldham Athletic provided Barry Owen, a former board member and current advisor to the board.

Owen said: "The club is demonstrating a case that that stand belongs to the football club. It's for the courts to decide on that with the evidence put forward.

"We're not satisfied that the way that that stand operates, that we are fulfilling our obligations to safety.

"We're not prepared any longer to compromise that situation. So when it came to the decision, we don't need to use four sides of the ground, we've got to make savings on cost.

"We can't continue to operate in the National League as we did in the EFL, it just won't work."

'When you lose the fans, you're done for'Oldham Athletic fans have protested both inside and outside of Boundary Park in recent years

Already fragile relations between the fans and the club's board further deteriorated in December when three fans were banned for "promoting their dislike" of the club, with one of the trio branding it as a "dictatorship".

The bans were issued directly by Oldham and were not court-issued football banning orders. They were overturned just two days later following a public outcry, but the damage was done.

The following month, in January 2022, Lemsagam said he would be willing to sell the club, only four months after saying that he was unwilling to sell up.

As yet, the club is still to be sold. But how did the relationship between the ownership and supporters sink to such a low point?

Matt Dean, board director of Oldham Athletic Supporters' Federation, said: "It went wrong when he decided not to listen to the supporters. Not to listen to the advice and support offered from the people that were going in who were not telling him what he wanted to hear, but what he needed to hear.

"He didn't use that as constructive criticism and, from that point, the more he ignored that kind of advice, it turned around into resentment and anger from the fans. And as soon as you lose the fans, that's it, you're done for.

"It's hard to pinpoint it exactly but he had to listen. It's like any business. If your customers walk away, you need to address what's going on to get them back."