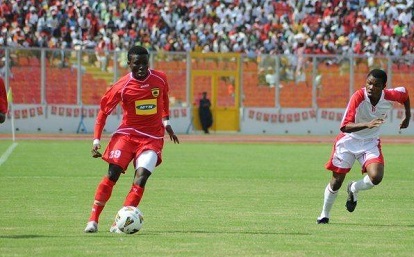 Former Kotoko star Francis Akwaffo has stated that he would love to return to the Porcupine Warriors although he added that he will consider an offer from Hearts of Oak if he is approached.

Akwaffo began his career with the Kumasi-based side and left in 2011 for Libyan side Al-Ittihad. He also had stints in Egypt and Europe but has returned to Ghana after failing to impress. He is currently a free agent.

He revealed that he hopes to lead Kotoko to success in the CAF Champions League during management level.

“My dream was to win the Champions League with Kotoko but it couldn’t happen but If I have the opportunity to serve at the management level one day, I hope to lead them to Africa glory,” he told Kweku Osei TV on Youtube’s streaming platform.