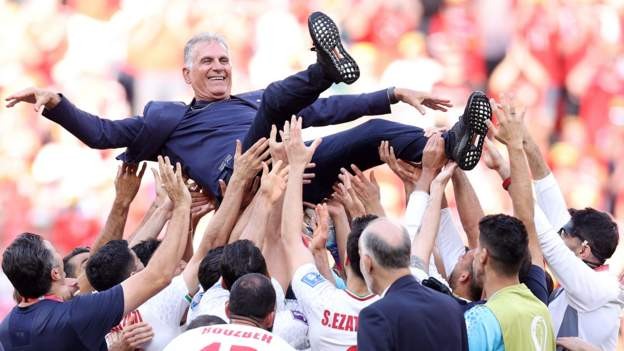 Iran are "back to football" after the win over Wales that boosted their hopes of reaching a first World Cup knockout phase, says manager Carlos Queiroz.

Iran's players were booed by their supporters for singing the national anthem on Friday, after opting not to against England in their opening game.

They had stayed silent on Monday in an apparent expression of support for anti-government protests in Iran.

"People will understand that these boys love to play football," said Queiroz.

"It was a wonderful day for us. We are back to football. I don't have words to say thank you to the players. They were brilliant, they deserve all the attention and respect."

Friday's result means Iran know a win over the United States on Tuesday will see them qualify from the group stage for the first time.

"This is just the beginning, but we need to finish the job," added Queiroz.

When asked to give a message to the Iranian public after the victory, the Portuguese said: "Our players deserve to be supported. We did it for them, we did it for them. That's the only reason we're here, to play for the fans."

In the build-up to the match against Wales, Iran striker Mehdi Taremi said the players were "not under any pressure" after declining to sing the anthem before the 6-2 defeat by England, but he did not engage with any questions about the situation in his country.

Mass protests in Iran in recent months have been met with a fierce crackdown.

They have been sparked by the death in custody in September of Mahsa Amini, a 22-year-old woman who was detained by morality police for allegedly breaking the strict rules around head coverings.

A woman in the crowd against Wales had dark red tears painted under her eyes and held a football jersey with "Mahsa Amini - 22" printed on it, while a man standing next to her had the slogan "women, life, freedom" on his top.

Human rights activists have said more than 400 protesters have been killed and 16,800 others arrested in a crackdown by Iran's security forces.

Iran's leaders say the protests are "riots" orchestrated by the country's foreign enemies.