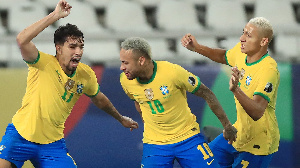 Manchester United forward Antony seems not to comprehend why Brazilian players are often targeted for dancing after scoring.

His comment comes following recent backlash on Vinicius Jnr and Neymar for their dancing goal celebration during matches.

Ahead of the Ghana clash, the former Ajax star says it is not only Brazilians that score and dance as he believes other players in Europe do same.

"There are many things that are not understood. People can't lose that joy, that essence that they have and it's not just Brazilian players that when they score a goal they dance”

“There are also players from Europe who do that. And what I don't understand is that eyes are on Brazilian players. It's always a yellow for Neymar or Vinicius for doing a dance," said the Manchester United player.

The Black Stars will take on Brazil in their first international friendly on Friday, September 23rd in France before travelling to Spain to play Nicaragua on September 27th.