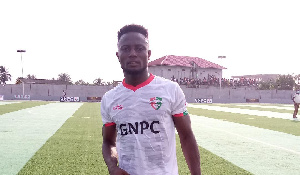 Karela United striker Maxwell Boakye has revealed he has received a lot offers from clubs.

The enterprising forward joined the ‘Pride of the West’ before the start of the second round of the Ghana Premier League on a two-year deal and had a descent campaign.

He featured 21 times in all competitions for the club scoring 2 goals in the process.

In an interview with Sylvester Ntim of Koforidua-based Bryt FM, the former Hearts of Oak marksman disclosed he has received a chunk of offers and is weighing up his options.

“A lot of clubs are after my signature. As I speak, I have six offers, three locally and three outside the country”

“For now, I cannot disclose the clubs in the local scene but there are offers. I’m still contracted to Karela United and everything will depend on my team, should they allow me to leave I will but if not, I will continue my trade with them”

“I also have offers from Ukraine, Saudi Arabia and Kuwaiti but the Kuwait deal is 90% done” he said.