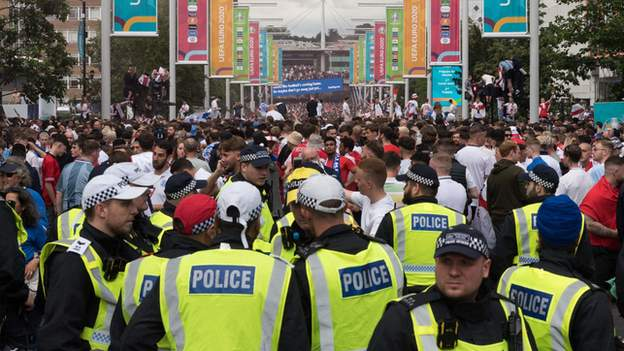 The crowd trouble at this month's Euro 2020 final at Wembley has been described as a "six-hour siege" by "lawless yobs" by Football Association chief Mark Bullingham.

Fans fought with stewards and police as they attempted to break through gates at Wembley on 11 July.

An independent review investigating the security breaches is to take place.

Bullingham's comments were made in a letter to the Department of Digital, Culture, Media and Sport chair.

"We are focused on how our stadium team of police, security and stewards had to battle the horrendous actions of thousands of lawless yobs during a six-hour siege - something no stadium is set up to deal with," he wrote to Julian Knight.

"We are determined to get to the bottom of what happened both outside and then inside Wembley and are aware that everyone will need to learn the lessons of the day and instigate changes for the future where needed."

The FA has been hit with four charges by Uefa surrounding the behaviour of fans.

In addition, a Uefa ethics and disciplinary inspector has been appointed to conduct a disciplinary investigation into events involving supporters that occurred inside and around the stadium.

They relate to disturbances caused during the national anthems, invasion of the pitch, the throwing of objects and the lighting of a firework by fans.

England lost to Italy in the final following a penalty shootout, with the match ending 1-1 after extra time.

Gold Rush: How Britain's Olympic dreams were rebuilt after a disappointing 1996

An exclusive BBC News special: Dominic Cummings on his role in Brexit, the pandemic and the government