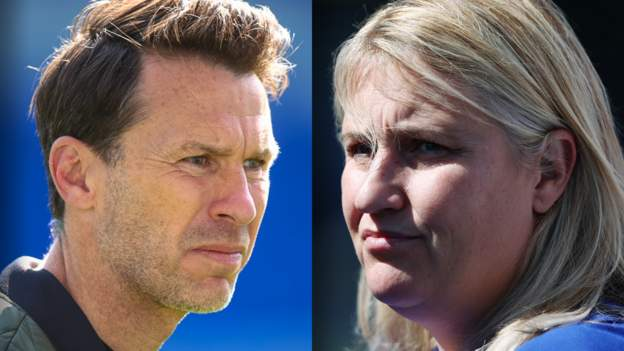 And like Chelsea, Taylor's side hope to secure a domestic double, having won the Continental League Cup in March.

"Regardless of what happens on Sunday, we're really proud of the way we have finished off the season," said Taylor.

Though the FA Cup has been won by Manchester City and Chelsea in each of the past five seasons, this will be the first final meeting between the rivals in the competition.

Taylor added: "We are desperate to win and, if we're not successful, I still think it is a positive season. We're moving in the right direction."

And while Chelsea won both league meetings this term, their 1-0 triumph at City in February has been followed by 13 successive victories for Taylor's side in all competitions as they rallied from a poor start to clinch the WSL's third and final Champions League spot.

"We're going into it in form, but Chelsea are too," Taylor said. "It's a one-off game and it is about who manages the game well enough on the day, who plays the game and not the occasion.

"It will be great for the fans of both teams and hopefully for the neutral it will be an exciting game as well. Hopefully we see some good football - and worthy winners at the end."

The City boss confirmed Demi Stokes and Jess Park are in contention, but keeper Karen Bardsley, Esme Morgan and Steph Houghton remain out.

Chelsea beat Arsenal 3-0 to win the delayed 2020-21 final in December and complete their first domestic treble.

Emma Hayes' side have won four of the past five domestic trophies available to them and are on an 11-game winning streak - a run which ensured they held off Arsenal to clinch a third successive WSL title by a single point last weekend.

Chelsea's last defeat - and only loss in their past 20 games in all competitions - came in the League Cup final against City.

More than 50,000 tickets have been sold for the latest instalment of this rivalry - exceeding the current record attendance of 45,423 for a Women's FA Cup final.

It will also be the first time the men's and women's finals are played on the same weekend, with Chelsea's men facing Liverpool on Saturday.

"When it comes to the crunch games we have coped well over the years. The team are unbelievable at finding sustained success.

"I admire the players so much for their motivation to keep improving."

Hayes said midfielder Fran Kirby will be available on Sunday, having not played for club or country since February after struggling with fatigue.

"Fran Kirby is a generational talent," the Chelsea manager added. "Maybe I'm biased because I work with her, but rarely have I seen a football player able to do what she does.

"She has eyes in the back of her head. She is a winner every day. She is grumpy when it's not going well because she wants to win so badly. She has really grown up at Chelsea, with a lot of adversity, and I have admired the way she handles that.

"I care about her. I always think about what I would want if it was my child. We have made decisions together to get things right. I just want her to be well and happy. She's in a great place today."

Live BBC One coverage of Sunday's tie between Chelsea and Manchester City starts at 13:50 BST, with kick-off at 14:30.