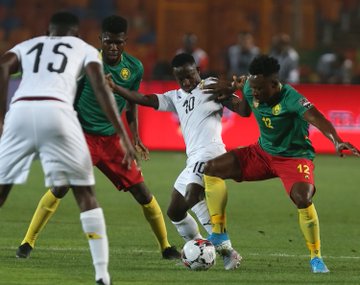 The Black Meteors of Ghana has drawn 1-1 with its counterpart from Cameroon in their opening game of the 2019 CAF U-23 Africa Cup of Nations (AFCON) tournament currently ongoing in Egypt.

In a pulsating first half encounter at the Cairo International Stadium, neither side could find the back of the net despite several incursions into respective opposing thirds.

Quite a number of half-chances fell to attackers on opposing teams but they failed to create any sort of magic as the game went into recess.

Black Meteors coach Ibrahim Tanko made one change at halftime to bring on Samuel Obeng to replace Issah Abass who in truth was bullied at times in the first half.

That change could not have an instant as the Indomitable Lions took the game by the scruff of the neck.

Their ability to combine attack with enviable compact defending produced a goal out of nothing on the 60th minute.

Bayern Munich youngster Franck Evina stepped behind a dangerous free-kick at the edge of Ghana’s 18-yard box and expertly dipped his effort over the wall and into the back of the net.

That goal kindled some urgency in the play of the Black meteors who pushed forward to search for an equalizer to bring them level.

A never say die attitude from Ghana with garnishing from some smart changes from head coach Ibrahim Tanko steered the team to pull level with four minutes to end the match when Mohammed Habib found the back of the net after connecting to a set-piece.

The game eventually ended 1-1 with Cameroon and Ghana sharing the spoils.

They now go into the second round of matches with one objective; to bag 3 points and keep their hopes of advancing into the semi-finals alive.