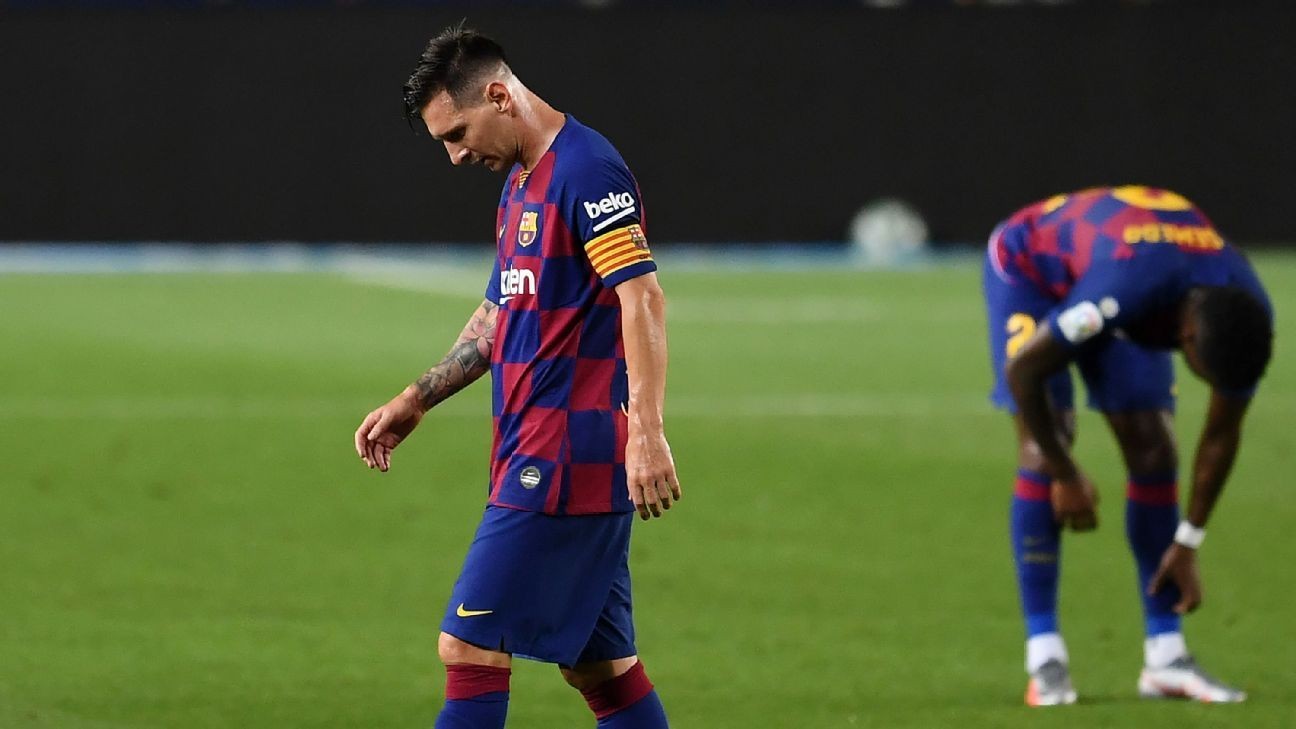 Barcelona's title hopes are hanging by a thread after they dropped points for the third time in four games on Tuesday, twice giving up the lead as they drew 2-2 with Atletico Madrid.

Barca twice led at Camp Nou thanks to Diego Costa's own goal and Lionel Messi's penalty, which was the 700th goal of his career for club and country, but Atletico replied with two penalties of their own, both scored by Saul Niguez.

The point moves Barca within one of leaders Real Madrid, but they will fall four points behind if Zinedine Zidane's side win their game in hand at home to Getafe on Thursday.

- What did you miss? The latest from Europe's top leagues
- Soccer is back! Stream ESPN FC Daily on ESPN+ (U.S. only)

It's difficult to highlight anything because the three points were so vital here, but Riqui Puig, starting the biggest game of his short Barca career to date, at least showed there are reasons to be hopeful the future.

It's difficult to see Barca reclaiming their title from here. A Madrid win on Thursday will complete a six-point swing since La Liga restarted earlier this month. That would mean Zidane's men would have to drop points twice in their final five games, while to capitalise Barca would have to win all of theirs, starting with Villarreal on Sunday. It doesn't look good.

Luis Suarez showed at the weekend why he's still so important to Barcelona -- and he is -- with two goals. But this was 90 minutes to demonstrate why he's also becoming a hindrance. At 33, the club need a long-term replacement and he needs to accept a reduced role.

4 -- Quique Setien surprised with a four-man midfield, handing Puig a second start in the league this season, and Barca looked OK in phases. However, the coach failed to get a grip on the game in the second half. He didn't make an attacking change until the 85th minute, bringing on Ansu Fati, and Antoine Griezmann didn't arrive until stoppage time. Should have been braver. Should have been more creative. Shouldn't have waited so long.

GK Marc-Andre ter Stegen, 6 -- Saved Costa's penalty but was adjudged to have moved off his line too soon by VAR. Saul scored the re-taken penalty and another in the second half, which Ter Stegen got his hand to but couldn't keep out.

DF Nelson Semedo, 6 -- A mixed night: won a penalty and created a good chance for Arturo Vidal at one end but gave away a penalty and struggled to deal with Yannick Carrasco at the other.

DF Gerard Pique, 6 -- Was good in both boxes and could even have won the game's fourth penalty when Jose Gimenez clambered over his back in the second half.

DF Clement Lenglet, 6 -- Much more reliable than Samuel Umtiti, who he replaced on the night, but could do little about the penalties his teammates gave away.

DF Jordi Alba, 6 -- Gave everything until the very end, when he broke up an Atletico break to start a Barca attack. Created chances, too, notably for Messi.

MF Sergio Busquets, 6 -- A solid return to the team following suspension at the weekend but often left too much space for Atletico on the break.

MF Ivan Rakitic, 6 -- Tested Jan Oblak with an early strike from range and worked hard before going off early in the second half.

Lionel Messi did all he could but once again he failed to get enough support from his teammates, as Barca dropped points for the third time in four games. Photo by David Ramos/Getty Images

MF Arturo Vidal, 6 -- Rash in the challenge early on, giving away a penalty, but was heavily involved as Barca chased a winner, driving forward and getting into the box at every opportunity.

MF Riqui Puig, 7 -- This was, without doubt, his biggest night in a Barca shirt. He has usually played in heavily-rotated sides but this was a chance on the big stage with the big players and he delivered an assured performance packed with Barca DNA.

FW Lionel Messi, 7 -- His corner, which was won from his clever free kick, was turned home by Costa early on to make it 1-0. His penalty made it 2-1. That, in a nutshell, is why Barca dropped points: they remain as dependent on Messi's magic as ever.

FW Luis Suarez, 5 -- Moves often broke down when the ball got to him and he didn't have a chance of note.

MF Sergi Roberto, 5 -- Returned from injury for half an hour but didn't add the drive from midfield he has done in big games in the past.

FW Ansu Fati, N/R -- Came on far too late to be expected to make an impact.

FW Antoine Griezmann, N/R -- Would have been as surprised as anyone to not be brought on until second-half stoppage time against his former side.