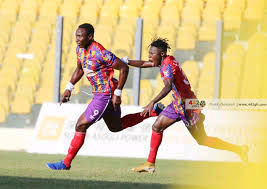 Hearts of Oak defeated Golden Kick 5-2 on Wednesday afternoon to advance to the Round of 16 of this season’s MTN FA Cup competition.

The Phobians last season emerged as champions of the domestic cup competition after a very exciting run that saw them beat Ashgold SC in the final.

This season, the capital-based club is back competing in the competition and keen on defending the title.

Today at the Accra Sports Stadium, Hearts of Oak played host to lower-tier side Golden Kick in a Round of 32 meeting.

Following a contest that produced seven goals, it is Hearts of Oak that cruised to victory.

The Phobians dominated play and although the visitors managed to score twice, goals from Kofi Kordzi, Daniel Afriyie Barnieh, James Sewornu, Kwadwo Obeng Jnr, as well as Suraj inspired Hearts of Oak to a massive victory.

Courtesy of the win, the Phobians are through to the Round 16 of this season’s MT FA Cup.