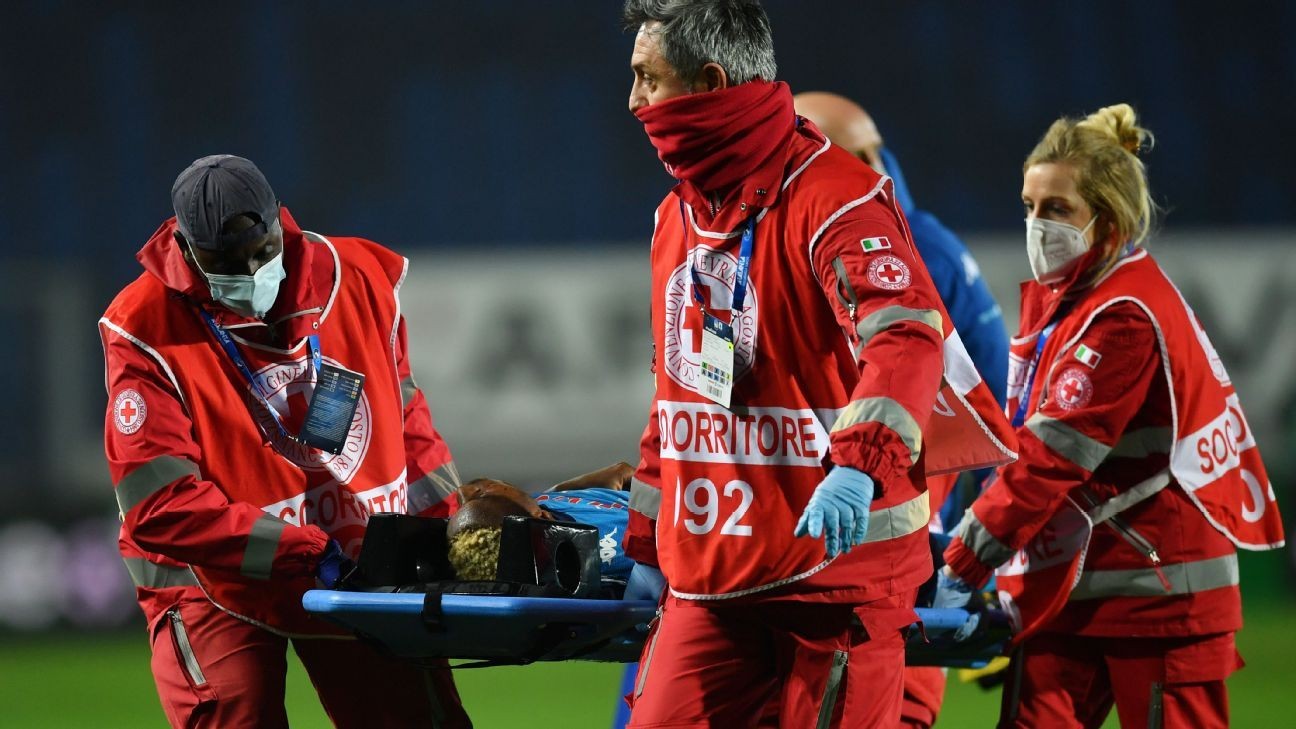 Napoli forward Victor Osimhen was discharged to return to Naples on Monday after spending the night under observation at a hospital in Bergamo following an alarming collapse towards the end of the club's 4-2 Serie A defeat by Atalanta on Sunday.

Osimhen was knocked unconscious in a scary incident during the final minutes of the game after a challenge with Cristian Romero; he was stretchered off the pitch and taken directly to hospital.

A close adviser to the player told ESPN that a disoriented Osimhen was shocked when he saw the video of the incident.

"He could not believe it when they showed him the video from the incident," the adviser said.

Multiple reports say the Nigerian regained consciousness on the way to the hospital, but the source tells ESPN that Osimhen was out for slightly longer.

"He said he lost consciousness for about 30 minutes," the adviser said. "That it was not until they got to the hospital that he actually realized what was happening around him and that was when they showed him the video."

Nigeria coach Gernot Rohr told ESPN that he was concerned for his star striker but happy to see him back on his feet.

"I was watching and I was yes, of course, I was worried," Rohr said.

"But I spoke to him and I am relieved now that he is OK and ready to play again if the doctors say it is OK."

Rohr and the adviser close to Osimhen both said the player had confirmed to them that he had been cleared to play for Napoli in the club's next game, the UEFA Europa League fixture against Granada at home on Thursday.

Rohr will name his squad for the final round of the 2021 Africa Cup of Nations qualifiers coming up next month, with Osimhen expected to be in the squad.

Napoli's Osimhen in hospital after knock to head

The German told ESPN the forward was still not at full throttle after recovering from a shoulder injury he picked up during Nigeria's qualifiers in November and then being infected with COVID-19 while on vacation in Nigeria over Christmas.

"For a long time he didn't start the game since our last game in November. His injury was a shock for everybody on the team. So, it was difficult in winter time for him and also COVID but now on the right way we're happy about it."

Osimhen is the second Nigerian player in Europe to collapse after a challenge with an opposition player.

Like Osimhen, Awoniyi was stretchered off and taken straight to hospital. Awoniyi told ESPN that at the time that he had no recollection of events between the pitch and hospital.

"It was a scary experience for me and I thank God for everything," Awoniyi said.

"I did not watch the game to see what happened to Osimhen, but I read about it later in the news and I pray for him and I hope he is fine and gets well soon."