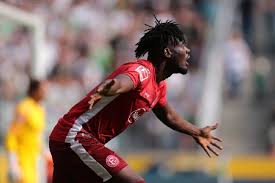 The victory at the Merkur Spiel Arena lifted the Rheinländer of the relegation drop zone to 13th place on the league table with seven points after eight round of matches played.

Nuhu, who joined the club from TSG 1899 Hoffenheim in the summer transfer window has been impressive for them after a slow start to his career at the newly promoted side.

The 24-year-old lasted the entire duration of the game as he helped his side secure their first clean sheet of the season.

He was not the only Ghanaian to feature in this game for the home side as former Bernard Terkpetey played 65 minutes whereas Nana Opoku Ampomah was an unused substitute for the victors.

Meanwhile, Kelvin Ofori did not make the match-day squad.