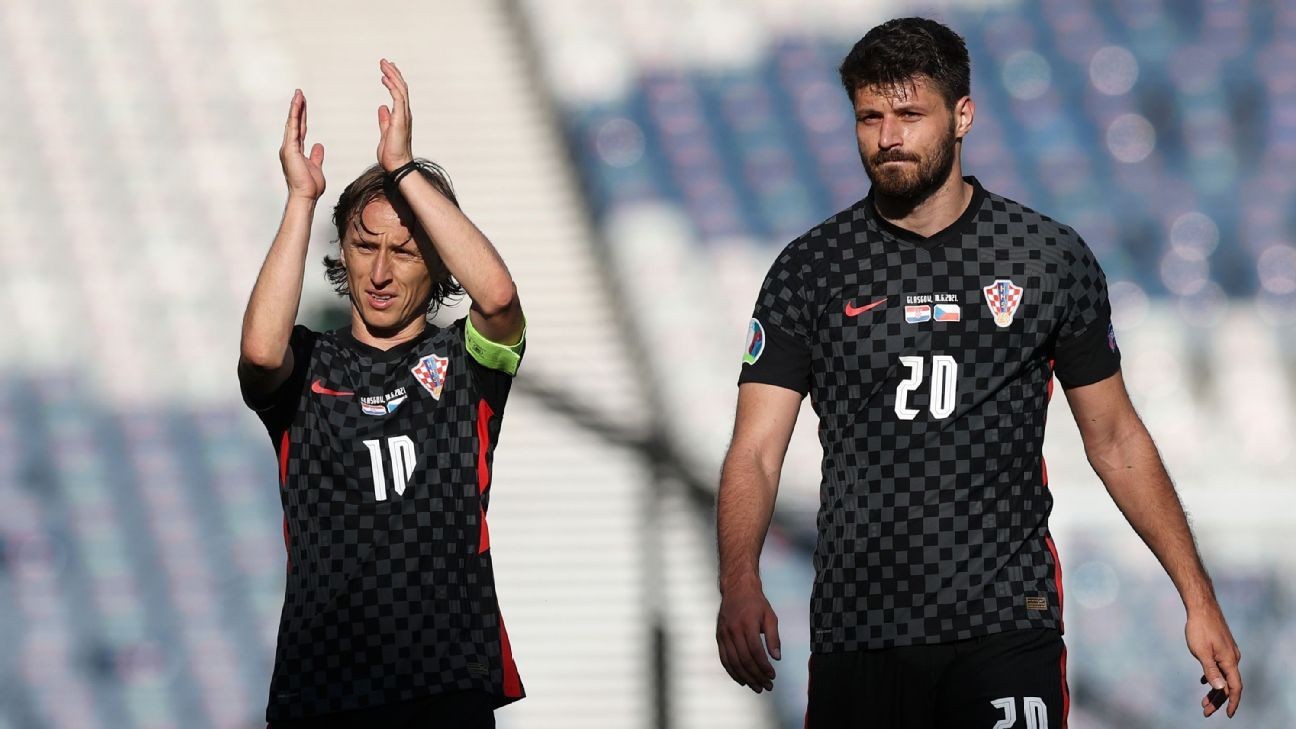 Sometimes, you learn more about a team by the words and actions of the opposing manager. Czech Republic boss Jaroslav Silhavy stopped a half-koruna short of doing a cartwheel at the final whistle of his country's 1-1 Euro 2020 draw with Croatia, but nevertheless celebrated like a man who had just triple-checked his winning Mega Millions ticket.

- Report: Croatia battle back to draw vs. Czechs

"I was surprised they didn't attack us in the first half -- they let us play, and we made use of that," he said. "It's a precious point against a strong opponent."

Silhavy may have been laying it on a little thick as a way to boost his country's confidence. Or, maybe he had fallen into the trap many fall into: believing that the previous major tournament is in any way a predictor of this one. After all, Croatia advanced all the way to the final of the last World Cup, where they lost to France. Along the way, they won all their group games -- including convincing victories over Lionel Messi's Argentina and Nigeria -- and, in the knockouts, overcame hosts Russia as well as England in the semifinal.

Schick's wonder goal: How the internet reacted, where it ranks

This Croatia team is a poor imitation of that one, and many seem surprised. Maybe they shouldn't be. There are plenty of reasons why results in one major tournament have very little bearing on the next, and yet such is the nature of international football that, based on expectations that are often irrational, we issue definitive verdicts not just on a team or a performance, but on the entire footballing health of a nation.

Why are Croatia struggling so much more this time around? Why do they look slow, groggy and, as Luka Modric himself put it -- presumably referencing the first 20 minutes against England and the first half against the Czechs -- "disorganized" at the start of games?

There's a variety of reasons: some are fixable, others not so much.

Croatia aren't living up to expectations after reaching the World Cup final three years ago, but there are valid reasons for their drop in performance. Lee Smith - Pool/Getty Images

The easiest thing to point to is the passing of time. Everybody is three years older and on top of that, four starters from that 2018 squad are gone. The latter point is somewhat over-stated. Josko Gvardiol, if anything, is probably an upgrade over Ivan Strinic at left-back. Goalkeeper Dominik Livakovic may not wear the Superman cape we saw Danijel Subasic don in 2018, but he's not the reason they have one point from two games. Ivan Rakitic was (and still is) a phenomenal footballer, but what many forget is that he had a relatively humdrum World Cup and, in any case, his is a position where Croatia have plenty of depth.

The guy whose absence you really feel is Mario Mandzukic, a big, physical, heart-on-the-sleeve center-forward. Croatia don't have one, and you can't magic one out of nowhere. That said, you don't necessarily need one to do well at tournaments.

As for the former, sure, they're older, but only Modric is older than 32 and only four are even in their 30s. Many are coming off good seasons at club level, too.

But what if the entire premise is wrong?

Croatia may boast household names like Modric, Chelsea's Mateo Kovacic, Milan's Ante Rebic, Inter's Marcelo Brozovic and Ivan Perisic, but maybe this team hasn't been particularly good in a long while. Since the start of 2020, Croatia have played 13 games, winning four (against Switzerland, Sweden, Cyprus and Malta), drawing two and losing seven. Some of it is down to being in the top Nations League tier (facing Portugal and France twice each), some of it more difficult to explain (a draw with Romania, defeat against Slovenia).

Perhaps the main reasons some of us expected them to be competitive were the 2018 run and the big names, but we should know from the club game that football doesn't work that way. We don't cite results from three years ago when predicting who will win the upcoming Premier League.

The impression is that Croatia's issues might be simpler. It's not so much that they play with little urgency -- when you have that much quality in midfield, it's OK to slow and raise the tempo as needed -- but rather, the sluggishness up front. Whatever combination of Rebic, Perisic, Josip Brekalo, Bruno Petkovic and Andrej Kramaric has been on the pitch, we've rarely seen opposing defences stretched or space opened up for their midfielders. On the one occasion it has happened -- Perisic's stunning run and finish against the Czechs -- it has yielded results.

Perisic salvaged a draw for Croatia against the Czech Republic, but they're struggling for cohesion and organization so far at the Euros. PETR DAVID JOSEK/POOL/AFP via Getty Images

The imbalance has forced Modric in particular to move around the pitch to find space. Against England, when he was almost man-marked by Mason Mount, he sought out wide areas. Against the Czechs, he played much deeper (Brozovic was benched), often picking up the ball near the centerbacks. Neither solution got the best out of him.

Coach Zlatko Dalic is well aware of this. He changed formation from one game to the next, he made changes, he used both carrot (after the England game, he insisted the match was substantially even and that the heat at Wembley really affected his players) and stick (following Friday's draw he said: "We need energy, we started badly again, we are struggling, we are not compact..."). Even Modric, normally toeing the party line, said they looked "disorganized." That's on Dalic.

Croatia still control their destiny. A win against Scotland in Glasgow would pretty much guarantee a spot in the knockout rounds and a shot at redemption, but they're going to have to ratchet things up several gears to do that or even come close to what we saw in 2018.

Mandzukic aside, it's probably not talent or age that's holding Croatia back -- it's the inability to prepare and execute. And the signs have been there for a while.