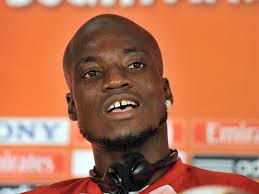 The former Black Stars captain Stephen Appiah revealed that he used to sleep in trotros during his early days as a footballer but that did not stop him from achieving his goal.

The 39 year old had spells with Juventus, Fernerbache and Udinese before hanging up his boots. He also played for the Black Stars, making 67 appearances and scoring 14 goals.

In his interview at the Joy Sports Link on Saturday, he revealed that his determination to succeed as a footballer helped him although he could have done horrible things to survive.

"I used to sleep in trotros and there were times I was woken up in the middle of the night to do some bad things but I said no because I just wanted to be a footballer," he told Nathaniel Attoh.

The former Ghana midfielder featured for the Black Stars in numerous tournaments including the FIFA World Cup in 2006 and 2010.