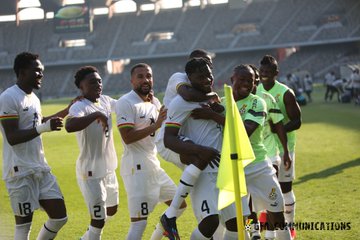 Ghana defender Joseph Aidoo has disclosed that importance of the 2-0 win over Switzerland in an international friendly on Thursday.

The West African countries concluded their 2022 World Cup preparation with a convincing victory at the Zayed Sports complex.

Mohammed Salisu and Antoine Serlom Semenyo scored in the second half to ensure the West Africans head into the World Cup on a high note.

"I think it's very important win for us a group, as the nation like to motivate ourselves and the people of Ghana," the Celta Vigo ace said after the game.

Aidoo is confident Ghana will progress from the group stage.

"It's a tough group but I think and I believe we will going to make it out," he added.

Black Stars will leave Abu Dhabi for Doha today for Doha and are expected to arrive this evening to continue with preparations for the World Cup finals.