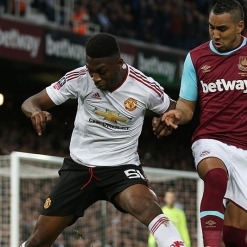 Reports in the UK media suggest Manchester United manager Jose Mourinho has decided to loan out the young player as he looks to gain more playing time.

There were reports also that Watford were also interested in signing him but have ultimately decided to pursue other options as Fosu Mensah’s head was turned towards moving to London.

Timothy Fosu Mensah was instrumental in Manchester United's pre-season tour of the USA.