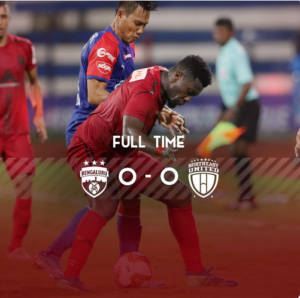 Asamoah Gyan put up an incredible performance for NorthEast United on his competitive debut in the 0-0 draw against Bengaluru on the opening day of the Indian Super League on Monday.

Gyan, who joined the side in the summer after mutually partying ways with Turkish side Kayserispor did not find the back of the net for Red and Black lads.

The former Sunderland striker lasted for 89 minutes of the game before being replaced with Argentine forward Maximiliano Barreiro.

He impressed throughout the game and came close to scoring in the second half but was denied by the opposing goalkeeper.

Ghana's highest goal scorer will be hoping to get off the mark when they host Odisha at home in their next fixture.