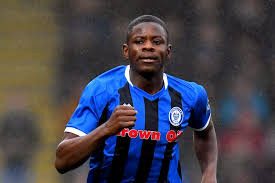 Ghanaian striker Kwadwo Baah bagged a brace for Rochdale AFC in their 4-4 draw against Charlton Athletic on Tuesday night in the EFL League One.

The 17-year-old put up an incredible performance to help his side seal a vital point at the Valley.

It was goals galore during a pulsating first half that resulted in Rochdale taking a 4-2 lead into the interval, as they took the game to the hosts.

Dale got off to a perfect start, when Lund broke the deadlock after just 12 minutes before Baah doubled their advantage lead in the 21st minute.

The Addicks responded immediately, though, and halved the deficit a minute later through Aneke as he pounced on a Dale error and finished in at the near post.

But on the half hour, Dale’s two goal lead was restored, as the Ghanaian scored his second of the evening.

Charlton reduced their tally to 3-2 in the 37th minute courtesy Jake Forster-Caskey's strike but Stephen Humphrys struck in the 42nd minute to give the visitors a 4-2 lead after the break.

After the recess, he hosts looked the better side and started mounting pressure on the visiting team with Chuks Aneke finding the back of the net in the 65th minute to change the scoreline to 3-4.

Three minutes later Ronnie Schwartz scored to level things up for Charlton when he was set up by Chuks Aneke.

Baah was substituted in the 66th minute by Stephen Dooley.

Meanwhile, Jason Pearce was sent off in the 88th minute after being booked twice for unsporting behavior.