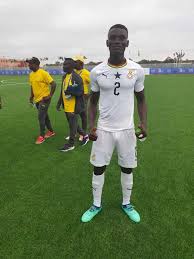 Ghana U20 defender Kobina Amoah was named the man of the match in the Black Satellites' 1-0 win over the Super Eaglets.

Percious Boah made it count at the other end with an 82nd minute free kick but Amoah gained the plaudits for his inspired showing during the game.

The Black Satellites have now earned a place in the semis of the competition which is being hosted by Benin.