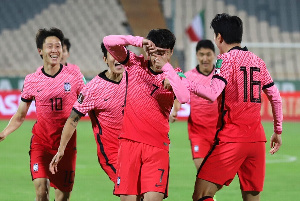 Ghana’s opponent South Korea are yet to win their second group game at the World Cup since 1954 (64-years).

The Asian giants will hope to break their long standing record of not winning their second group game at the mundial when they face Ghana on Monday.

They made their World Cup debut in 1954, with their best results being a fourth place finish in 2002 when they co-hosted the tournament with Japan.

South Korea shared the spoils with Uruguay whiles Ghana suffered a 3-2 defeat against Portugal in the opening day fixture.

Below are the results of South Korea’s 2nd World Cup group games since 1954: