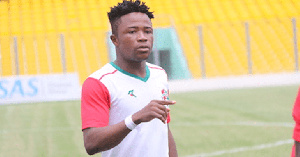 The 2021/22 season has been scheduled to start on Monday, October 25, 2021 with 79 foreigners expected to participate in the league with ten Ghanaians no exception.

Diawisie Taylor and Benjamin Bernard Boateng will feature in the league for the first time after securing a move to Future FC and Al Ittihad Alexandria at the end of the Ghana Premier League campaign.

The pair enjoyed a descent campaign with Karela United and Elmina Sharks respectively in the domestic topflight.

Taylor emerged as the Ghana Premier League top scorer with 18 goals in 32 matches.

Evans Mensah and Kwame Bonsu will team up for Ceramica Cleopatra whereas Salifu Moro and Benjamin Bernard Boateng plays for Al Ittihad Alexandria.

Below are the ten Ghanaian players who will feature in the Egyptian Premier League new season,

John Antwi - Vanguards of the Army