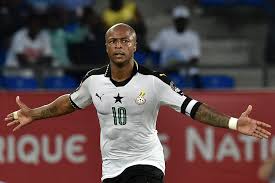 Black Stars skipper Andre Ayew believes Ghana will qualify for the 2021 Africa Cup of Nations despite being placed in a difficult group.

Ghana have been placed in Group C alongside South Africa, Sudan and Sao Tome and Principe.

Black Stars will face South Africa on Thursday at the Cape Coast Stadium before travelling to Sao Tome and Principe to play them four days later.

"Sudan are a very tough team. We have met them a few times. [For] South Africa, we have met them a lot of times. Right now every team has its qualities so we have to block their qualities and use ours because at the end of the day we have great players," the Swansea City star said in an interview with Joy Sports.

"Football is a game of a win, draw or lose but we have to give everything. We have to die. We have to run. We have to play and make sure that at the end of the day we can go home and look at ourselves and say we gave everything we had for the nation".

"It is not going to be easy. I can tell you that this qualification is going to be very difficult but we will go through”.