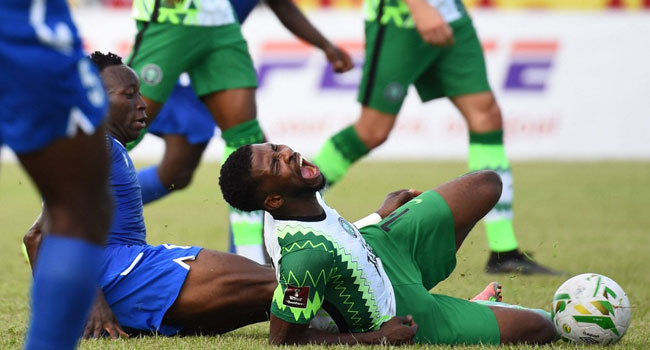 Nigeria suffered a shock 1-0 home defeat against Central African Republic in African qualifying for the 2022 World Cup on Thursday.

Substitute Karl Namnganda, who plays in the French fourth tier for Les Herbiers, latched on to a hopeful long ball forward as it fell between two Super Eagles defenders to score in the 91st minute in Lagos.

It was Nigeria's first loss at home in a World Cup qualifier since October 1981 when they were beaten 2-0 by Algeria in front of 80,000 fans in Lagos.

In the other Group C match, Liberia may be ruing the poor state of their stadium in Monrovia after losing 2-1 in stoppage time against Cape Verde in neutral Ghana.

Van-Dave Harmon opened the scoring for Liberia deep into first-half stoppage time before Jamiro Monteiro, just on as a substitute, levelled matters seven minutes after the break.

Cape Verde snatched victory in the 92nd minute as another sub, Garry Rodrigues, smashed in the winner from the edge of the area.

The results leave Nigeria top of Group C with six points from three matches, while Central African Republic and Cape Verde both have four points with Liberia on three.

Nigeria have a chance for revenge on Sunday when they play CAR in neutral Cameroon while Cape Verde host Liberia the same day.

CAR and Liberia are among the 11 countries, representing over a quarter of Africa's teams in the second round, to be barred from playing at home because of poor infrastructure.

Sudan, Ivory Coast, Liberia and Mozambique were added to the eight countries that received bans for last month, with Niger having been removed from the list after being given the go-ahead to host games.

In Group B, Tunisia maintained their 100 per cent record with an easy 3-0 win over visiting Mauritania.

Tunisia went ahead when a fierce strike from 30 yards from Cologne's Ellyes Skhiri flew into the top corner after 15 minutes.

Captain Wabhi Khazri doubled the lead two minutes before half-time and the win was completed in the final moments by Zamalek's Seifeddine Jaziri.

In the other game in the group, Equatorial Guinea registered a 2-0 home win over 10-man Zambia, who had midfielder Prince Mumba dismissed for a straight red card in the 25th minute.

Saul Coco put the hosts ahead 10 minutes before half-time in Malabo, and captain Emilio Nsue secured victory with his goal two minutes from the final whistle.

Tunisia are top of the group on a maximum nine points, Equatorial Guinea's second win lifted them to second six points, Zambia remain on three while Mauritania are pointless. Both reverse fixtures are on Sunday.

Elsewhere, Steve Mounie scored a stunning winner against hosts Tanzania which could be key to Benin's hopes of reaching next year's play-offs.

The forward's 72nd-minute strike from the edge of the area secured the visitors not only a crucial 1-0 win in Dar es Salaam but also top spot in Group J.

Benin now have seven points and are being chased by DR Congo, who won their first game after beating Madagascar 2-0 at home to move two points behind the leaders.

Tanzania, who play in Benin on Sunday, stay on four points while Madagascar are propping up the group at the halfway stage after a third straight defeat.

The Malagasy held out until the 35th minute when Chadrac Akolo opened the scoring in Kinshasa before Dieumerci Mbokani grabbed his third in as many qualifiers from the penalty spot late on.

Madagascar can gain revenge when hosting the Leopards, the only team in the group to have reached a World Cup, on Sunday.

In Group E, Mali stayed unbeaten with a 5-0 thrashing of Kenya in a game played in neutral Morocco as Mali is another nation that does not have a stadium that meets the requirements to host international games.

The 'hosts' were 4-0 up before half-time, with Turkey-based Adama Traore scoring after just eight minutes before Ibrahima Kone, who plays in Norway, scored a hat-trick, including one from the penalty spot.

The rout was completed in the 87th minute with a goal from Reims' Moussa Doumbia.

In the other group match, striker Fahad Bayo scrambled the ball in after it had rebounded off a post to give Uganda a tense 1-0 win against Rwanda in Kigali.

The results mean Mali have seven points, with the Cranes on five, Kenya are third on two while Rwanda are bottom with just a single point. The two reverse fixtures are on Sunday.

The winners of Africa's ten qualifying groups will contest next March's play-offs to decide the continent's five representatives at Qatar 2022.