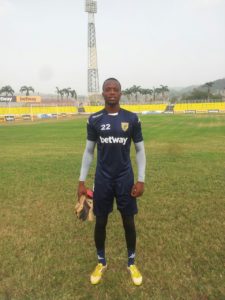 Young goalkeeper of Ashantigold George Apronti says the break in the Ghana premier league and a weekend without FA cup football will provide them with the needed time to regroup as a team.

The miners who were winners of the Ghana Premier league two seasons ago have struggled to replicate the same for that won them the league.

The Obuasi based club is currently languishing in the relegation zone, a position the 21 year old goalkeeper believes is bad for a team like Ashgold.

Meanwhile, the league is on break with the FA Cup round of 32 games scheduled for the weekend. Ashgold were eliminated by Asokwa Deportivo.

“I think also with the amount of time we will be having during the break we should be able to re-organize and change the direction the club is headed. We have a good coach in C K Akunor and the players are also ready for us to save our season,” he added.

The aboakese lads defeated champions Wa All Stars in their final game of the first round and will play the same opponents when the second half of the season begins.